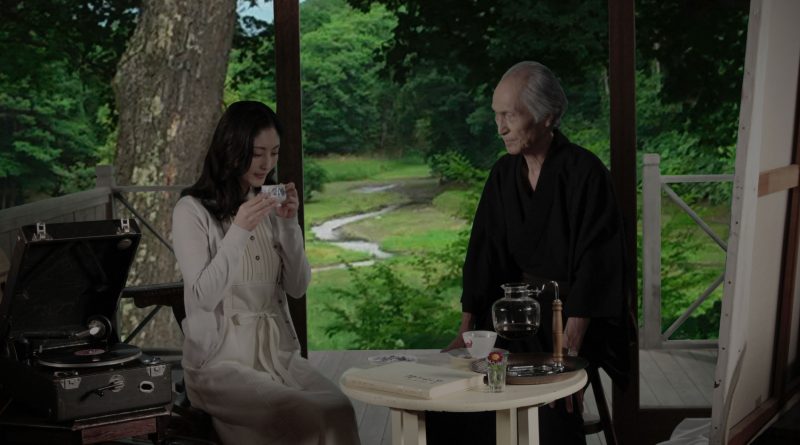 In Seven Weeks, the second film in Japanese director Nobuhiko Obayashi’s trilogy on war, he asserts that for every death, someone takes that person’s place. Honoring the importance of an individual’s passing, he proposes to “take a look at one tiny tale of a death” because with each “there is a story.”

Thus begins the simple, very straightforward setup for subsequent events, though their unfolding is anything but uncomplicated. Ninety-two-year-old doctor Mitsuo Suzuki’s death initiates nananoka, the Buddhist funeral ritual of a commemoration every seven days for forty-nine days, hence the title Seven Weeks. Mitsuo’s family of a sister, grandchildren, a great-granddaughter, a former nurse at his clinic, and friends will gather in his former open-pit mining town of Ashibetsu in Hokkaido, once home to seventy thousand and now only sixteen thousand.

Through flashbacks, imagined encounters, and appearances by Mitsuo’s ghost, secrets will be teased and revealed. Topics include complicated personal family dynamics and decisions, Japan’s WWII history, and contemporary politics, especially consideration of coal, nuclear, or renewable energy choices. But, overall, rather than letting the gems embedded here linger and resonate, Obayashi is reluctant to pause for contemplation, seldom lingering on a shot for more than a few seconds before his forward rush to another image. He seems averse to leaving a shot on the screen for consideration, his exhausting style off-putting for anyone preferring time to savor ideas, characters, or the poetry that punctuates quieter moments.

Through sixteen chapters and just shy of three hours, the film does display arresting art direction with beautiful scenes of nature contrasting with darker, more intimate interiors. But the camera too often zooms in or out, moves and reframes, relying on close-ups and reaction shots. Adding another element, interspersed are fourteen musicians playing various instruments walking horizontally across the frame or playing in the background of select scenes. A lovely consideration of life and death, I wish it were more accessible. In Japanese with English subtitles.