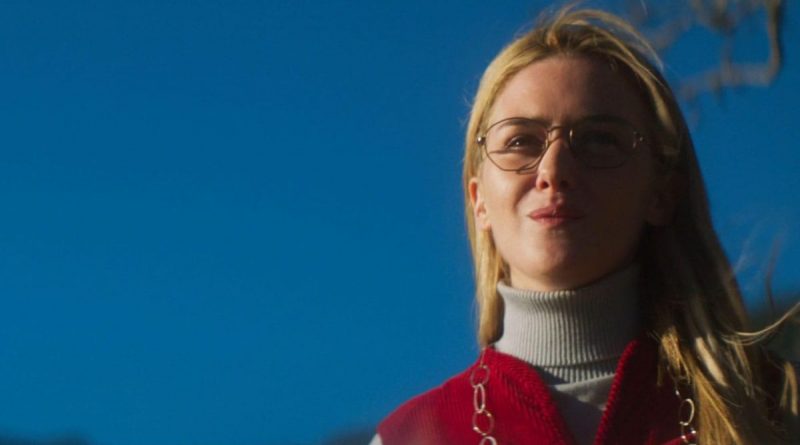 In her memoirs, Hillary Rodham Clinton mentions that, in 1969, just after graduating from Wellesley and before entering Yale Law School, she spent her summer vacation in Valdez, Alaska, working in a fish- packing plant. She observed, “Sliming fish was pretty good preparation for life in Washington.”

Based on that slim factoid, Zachary Cotler and Magdalena Zyzak concocted this parable. They’d previously co-helmed The Wall of Mexico (2019) about rich Mexican-Americans who build a wall to keep out poor white thieves, along with Maya Dardel”= (2017), featuring Lena Olin as a poet who announces on a radio show that she plans to commit suicide.

This story begins with: “What follows is a work of fiction. So is the United States political situation.” If the filmmakers were trying to make a socio/political point, it’s too elusive to decipher.

Instead, they weave a pointless narrative about an idealistic young woman with long, blonde hair whose name is Hillary (Addison Timlin). Early on, she announces, “I’m going to be a politician. I’m on a predetermined path.”

Knowing no one, Hillary befriends two Japanese men who watch her walk home from the cannery each day. Mitsuru (Toshiji Takeshima) is a drunk but Ryohei (T.J. Kayama) pursues the relationship. Perhaps teasing, he says he’s from Nagasaki – to which she seriously replies, “I guess I’ll have to be involved in something like that (one day).”

Soulful Ryohei is smitten but self-absorbed Hillary prefers to engage in meandering conversations about human nature and her future, murmuring, “You can’t get rid of ignorance. It always seems to triumph…somehow, I feel doomed.”

The title emanates for Hillary’s self-description as “a moth that has to be in a cocoon first” before pursuing what she perceives as her destiny.

While Lyn Moncrief’s cinematography captures Alaska’s snow-capped mountains and spectacular scenery, the concept’s self-conscious pretentiousness is as off-putting as it is tedious.

On the Granger Gauge of 1 to 10, When I’m a Moth is an oddly frustrating 3, streaming on most digital platforms.