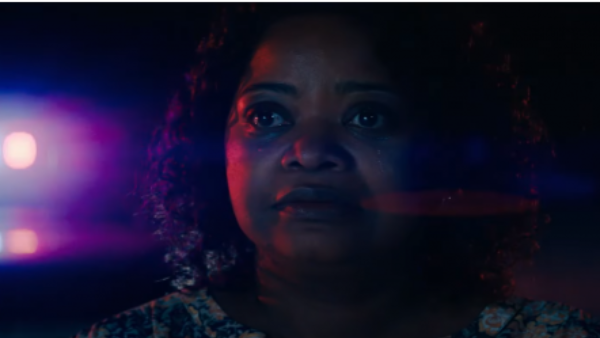 An alien threat leads decorated soldier Malik (Riz Ahmed) to kidnap his sons Jay (Lucian-River Chauhan) and Bobby (Aditya Geddada) and take them across the Southwest desert highways in Encounter, the latest genre-bender by English director Michael Pearce. The film, which is also co-written by Pearce, affirms him as a talent with vision, showing he has an ability to intermingle the tensions unique to psychodrama and sci-fi actioners, while offering a showcase for Ahmed, an actor who, with Malik, is adding to his arsenal of unforgettable performances.

Malik Khan has done 10 tours as a marine, but it’s taken its toll. He got court-martialed after beating his commanding officer and went to prison for two years. He’s been writing letters to his son Jay who lives with his brother, ex-wife, and her new partner, without revealing where he’s been. Though Malik dutifully stays in contact his parole officer Hattie (Octavia Spencer), he has discovered that bugs, all bugs, are carrying alien parasites that will take over their hosts, a la Invasion of the Body Snatchers. He knows being a good father means can’t let them get him, or his sons, so he spirits them away from their house in the dead of night, setting out for Groom Lake, a salt flat in Nevada known to be part of Area 51. The authorities contact Hattie, fearing Malik is a ‘family annihilator’, with the ultimate plan to kill himself and his sons, and they all go on a chase after him. For Malik, it becomes a race against time, believing no one can be trusted, and only he can save his boys.

Ahmed is completely magnetic, staying tuned into the specificities and quirks making up his version of Malik, reacting from a very clear place, whether working with the scared boys child actors Chauhan and Geddada play, or against Spencer’s calmer, more centered Hattie. The trajectory of Encounter depends on getting viewers sympathetic to how Malik sees the world and his future. Chauhan and Geddada are devoid of any of trappings or the performative, attention-getting characteristics that make so many child actors insufferable. They turn in such naturalistic performances, it feels like acting is as second nature to them as playing with their G.I. Joes.

Though the suspense never lets up, Encounter is completely character driven. Pearce builds tension while maintaining a consistent tone, even as the story shifts and surprises. He anchors the plot in Malik’s interactions with his sons. Those color his increasing alarm with his own understanding of reality, his experiences with Hattie, and his run-ins with strangers that, if contaminated by these alien bugs, will put the lives of his boys at risk. It is in the way Pearce allows the truth of what is happening to reveal itself, little by little, clue by clue, that will keep the audience in thrall. These kids are repeatedly in mortal danger, and however excruciating the turns in the plot become, viewers have to see their journey out till the end.

There’s not be a film that has examined its subject matter in quite the same way. Although scenes that don’t feature Ahmed and his younger co-stars aren’t quite as compelling, and Octavia Spencer is vastly underused, Encounter still offers a fresh perspective while using the sci-fi genre.