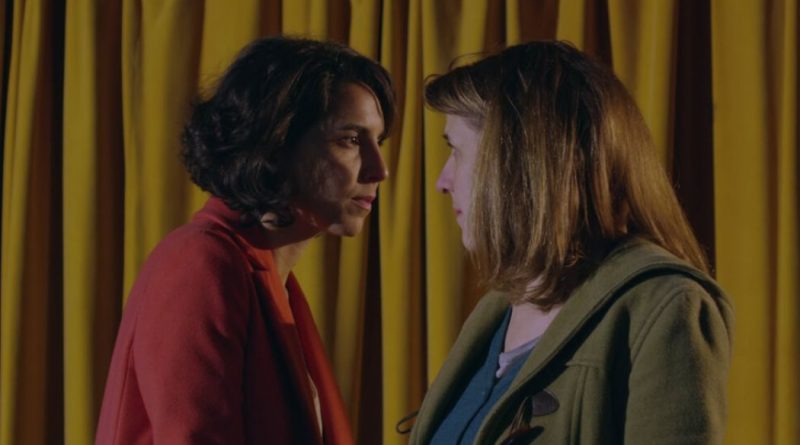 Writer/director Matías Piñeiro opens Isabella with a full screen of three interlocked blue rectangles dissolving into purple. The camera tilts down revealing a long, narrow pier jutting horizontally out into the ocean, as a narrator describes the color as “both a cooled red or a heated blue, fragility and strength at the same time. . . the color of ambiguity.”

A man walks out to the end of the pier, a woman joins him, as the commentary describes a ritual of twelve stones “to resolve uncertainties, to decide between action and inaction.” Each stone is thrown into the water, each offering an opportunity to doubt. “Each stone . . . one doubt. Twelve stones . . . twelve doubts.” The dozen stones present twelve chances to doubt; for each stone thrown, doubt is overcome. If the person holds on to a stone, doubt wins. However, the speaker adds that “our doubts are treacherous, making us lose what we could gain for fear of risk.”

This intriguing introduction anticipates repeated color designs that punctuate ambiguous action. The thematic prologue yields to the story of Mariel and Luciana, each auditioning for the role of Isabella in a Buenos Aires production of Shakespeare’s Measure for Measure. A conflicted, inexperienced Mariel, dominating the action, practices for her audition with her friend Luciana. Later she learns that Luciana, the more experienced actress who previously turned down the role, is also again auditioning. Complicating their relationship, Mariel’s brother Miguel, who feeds her inside information and from whom Mariel solicits money, is also Luciana’s lover.

Puzzling, even bewildering, events follow out of chronological order, destroying any linear progression. Some scenes occur in the beautiful Cordoba Mountains, along streams, and wooded paths. Others take place in a theater, a small room with a one way mirror, up a narrow flight of stairs, or on a busy street. Purple light and various colored paper appear with reminders of the ritual of the stones, suggesting ephemeral nature impacting human choice, as did French director Eric Rohmer’s 1986 The Green Ray. Mystifying and yet engaging, absorbing and thought provoking, Isabella is in Spanish with English subtitles.