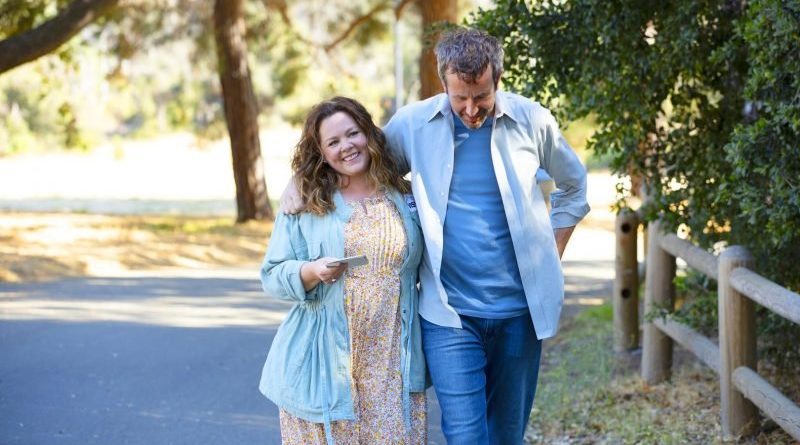 Oooh, you think, this is going to be a great movie. Just look at that cast! Melissa McCarthy! Chris O’Dowd! Daveed Diggs! Kevin Kline! Then you look at the movie, and you think, “Meh!” The Starling is a film with more promise than delivery but worth analyzing for what went wrong.

A starling is an aggressive, murderous, grackley, territorial bird. In The Starling, the starling is, duh!, a symbol. The film is about a family in crisis. Lilly and Jack mourn a great loss. Jack’s grief lands him in a mental institution while Lilly’s keeps her distracted from her job at a supermarket.

She spends an inordinate amount of time perfecting the display of Hostess Sno-balls during the week. On weekends, she drives an hour each way to take Jack his weekly Sno-ball in a little brown bag labeled with his name like a child’s lunch. She attends therapy sessions with him. When his therapist asks him how he is, he says, “Fine.” When his therapist ask her how she is, she says, “Fine.” The therapist, no fool, sends Lilly to … a therapist. Now a veterinarian, he is doubly handy at counseling after a starling attacks Lilly in her garden.

Following this dear couple’s path through stages of grief should be up-lifting if painful. The plot has possibilities as it considers how to have a marriage after such an attack to the heart and how we turn on ourselves under such an attack.

But The Starling just doesn’t work.

Back to analyzing why. Can’t be the cast. Those are good actors with tasty reputations. Kline, especially, stands out as the doctor, and O’Dowd performs his soliloquy with compassion. So you look to the production crew to blame, especially writer Matt Harris, whose resume does not stand out. Director Theodore Melfi produced Hidden Figures so there’s that.

Then you look to yourself. Maybe you were expecting more physical comedy from Melissa McCarthy, as evinced in Thunder Force; maybe you forgot about her astounding work in Can You Ever Forgive Me? Maybe you expected O’Dowd to be his funny-boy self as in Moon Boy. Maybe you just couldn’t make the U-turn demanded by their serious work.

Maybe it’s all of the above, which does not make the film worthless. Although “The Starling” falls like a dead bird out of the blue sky, it’s still worth considering for analysis.