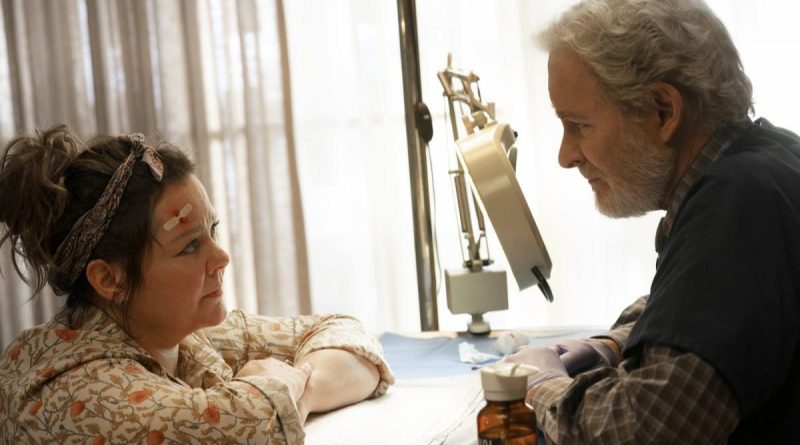 At some point, you’ll be an amateur to loss, but eventually everyone gains expert status. If you think you’re immune, you aren’t. This is something director Theodore Melfi banks on with his new film The Starling, a dramedy in which parents Lilly and Jack Maynard are grappling with grief from losing their baby daughter Katie to SIDS. Starring Melissa McCartney and Chris O’Dowd, The Starling works the extended metaphor of Lilly’s inability to control a bird in her garden that repeatedly attacks her while protecting its nest as a reference to the grieving parents’ inability to deal with their sadness. The film works and reworks that metaphor and others to such an exhaustive degree that it might as well be the audience members getting dive-bombed à la Tippi Hedren in The Birds.

The story starts with the happy couple painting Katie’s room. Moments, or rather nearly a year later, their fortunes have shifted dramatically. Katie is dead, Jack is in a mental hospital, and Lilly is left working her thankless job as manager of the local supermarket and keeping the home fires burning, as it were. She too is facing, or rather not facing her loss in a myriad of ways, like giving most of their furniture away, or rage-mowing their lawn. It’s her yard work that attracts the starling, who flies right at her, nicking her in the forehead. On a referral, she makes an appointment with Dr. Larry Fine (the always wonderful Kevin Kline), a grief psychiatrist who, for reasons never explained, has left that field to become a veterinarian. After a brief but pointed first meeting where Dr. Fine seems to give voice to her suffering, Lilly just starts showing up at Larry’s office and home at wildly inappropriate times expecting help. At Lilly’s house, the war between her and the bird continues to escalate, and she is no closer to facing her loss. Meanwhile, Jack is checking his meds, clearly with plans to overdose when he’s built up enough for a lethal dose. Lilly visits him every week, but she can’t so much as say Katie’s name without Jack walking away. How will they ever deal with this loss and move on together?

For almost two hours I kept waiting for the dialogue to go deep enough that it might fully connect with parents who struggle with the loss of a child. There are certainly moments that ring true and feel like they’re building towards something, but then the movie goes back to montages with warm fuzzy music, and obtuse metaphors about dealing with, or not dealing with sadness. Lilly’s garden is growing, but she’s still sad, so she yanks the plants out, then the starling starts dive-bombing her again, but it’s in order to protect the babies.

The music of the film, with a score full of pizzicato strings during Lilly’s time in the garden and folk rock originals by Belinda Carlisle or swelling orchestra when we’re cued to ‘feel’, seems alternately like it’s making light of the situation and attempting to guide the audience’s emotions. Even when the film is working, it’s doing so while trying to serenade us to death.

The film falls flat, through no fault of the players involved. Melfi knows how to stack the deck with overqualified talent. Secondary players include David Diggs, Timothy Elephant, Loretta Devine, and Rosalind Chao, all of whom are woefully underused. Melissa McCartney is believable regardless of what role she takes on, and it’s a pleasure to see any woman over 40 in a starring role, especially one that’s not starving to death. O’Dowd leans into Jack, but the script builds his honest portrayal into something meaty only towards the end of the movie. By then it’s too late, and there’s still that damn music. It’s like Melfi doesn’t trust the script or the actors to make us feel.

The Starling comes very close to working. I get the sense that it’s even possible McCarthy, O’Dowd, and Kline did their work believing it would amount to a pretty good movie, only to watch the end result and wonder what the hell happened. If only Melfi trusted viewers to come along on the journey without being manipulated with a script that hits you over the head (at one point, even Lilly says to Kline’s character, “real subtle stuff, Larry.”), and a score that won’t quit.

No doubt a fair number of folks will still enjoy The Starling, including those who have experienced anything along the lines of what is represented in the story, as long as it happened a long long time ago. The rest should watch some of the many better films by the impressive cast, while those still reeling from child loss should head straight to the Compassionate Friends support group, where it may be hard, but at least time spent there won’t be accompanied by a score of swelling strings.