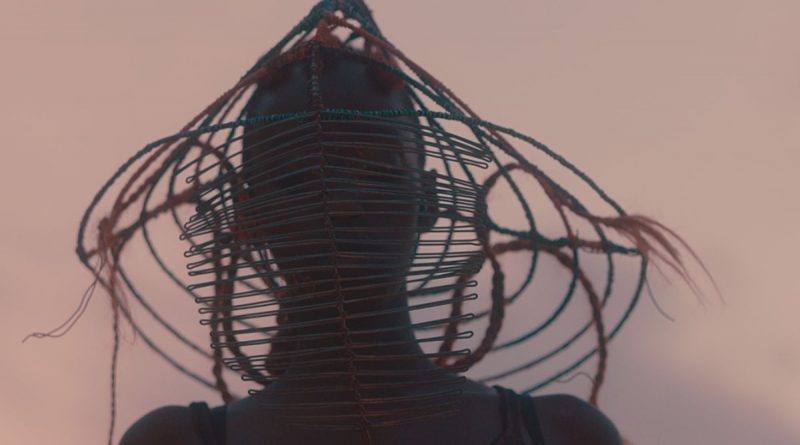 It’s sadly unsurprising perhaps that the Saul Williams and Anisia Uzeyman co-directed queer scifi musical Neptune Frost finds Uzeyman’s name frequently deleted in favour of casting sole authorship of the film to the acclaimed, multi-talented Williams who is still synonymous with his 1998 Sundance Grand Jury Prize winning film Slam, in which he starred and co-wrote. But considering the aesthetic, philosophical and ideological aggression which propels Neptune Frost from its opening moments, there’s something of a depressing irony surrounding Uzeyman’s common erasure as a key co-author of the film, often (at best) reduced to a footnote, if she’s mentioned at all.

Aside from grossly underplaying the Rwandan filmmaker, writer and actors donation to the film (her second feature directorial credit after 2016’s Dreamscapes; this is Williams’s first), it also entirely misses the collaborative nature of the film as a whole, where coming together – networking – is quite explicitly at the core of the film’s narrative. The film follows its eponymous character, an intersex infotech warrior played effectively by both Cheryl Isheja and Elvis Ngabo as they come to terms with their place in the world and the threats that lie within, and are compulsively inspired to return to the home of their late mother. Here, Neptune meets coltan miner Matalusa (Bertrand “Kaya Free” Ninteretse) and sparks literally fly; in this Afro-futuristic musical scifi, this encounter almost transcends love, and their meeting triggers a global hacking event that challenges the status quo that has seen them and others like them exploited for far too long. Bound through dance and song, the beat doesn’t stop as power structures are questioned, assaulted and brought to their knees by the very people whose labor it depends on.

Dazzling costume design, intoxicating and entirely non-traditional song-and-dance routines and a defining spirit of rejecting the orthodoxy, when Matalusa raises his middle finger during one musical routing and sings “Fuck Mr Google”, it is clear that while not particularly subtle, Neptune Frost has no interest in subtlety anyway. This is a film that goes straight for the jugular, an outlet not just for song and dance, but for a stream of endlessly quotable one-liners that in and of themselves act as micro-manifestos (the line that “to imagine hell is privilege” is a particularly memorable example of this). Neptune Frost resets the musical as a kind of sonic subversion, where the organic nature of intersectionality is revealed; far from a construct, it’s a literal rhythm where critiques of heteronormativity sit in radical harmony with those of race, colonialism and capitalism.