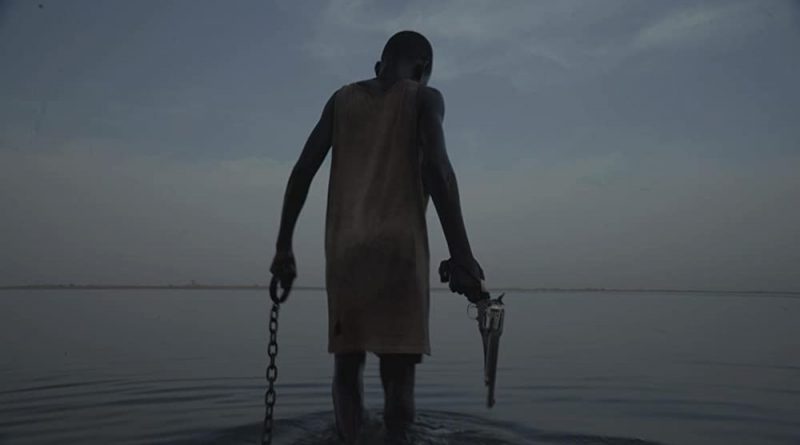 The genre-warping Saloum starts out as an action-heavy thriller and glides seamlessly into a supernatural horror tale with intense psychological underpinnings.

Set in the wake of a real 2003 military coup d’etat in Guinea-Bissau, Congolese filmmaker Jean Luc Herbulot’s protagonists are high-profile mercenaries, hardened professionals referred to as “hyenas,” whose livings inextricably linked with chaos and bloodshed. It would be a stretch to call Chaka (Yann Gael), Rafa (Roger Salah) and Minuit (Mentor Ba) moral men in an amoral profession; the best possible spin is that they don’t revel in slaughter but just accept it as the cost of doing business. By its nature, their business is volatile and their current gig–extracting a Latin drug lord and his briefcase full of gold bars in the middle of a military coup d’etat–goes pear-shaped almost immediately. Their well-planned escape scuppered by heavily-armed resistance, they’re forced to land their crippled helicopter in the middle of the Senegalese jungle. The soldiers of fortune strike out for a small coastal holiday camp, figuring to lay low while they locate the materials needed to repair their helicopter.

That plan does not play out well; there are tensions within the group to begin with, and their only exacerbated by the fact that they’re stranded, surrounded by civilians–guests, camp workers, villagers, a local cop and an enigmatic deaf-mute woman named Awa (Evelyne Ily Juhen)–and driven by their dark pasts. And that’s especially true of de facto leader Chaka, whose particularly poisonous demons magnify his vulnerability once it becomes clear that they’re not just facing police, soldiers and other mercenaries; There’s something much darker and more powerful at work.

Saloum has been compared to Quentin Tarantino’s From Dusk Til Dawn, largely for is seamless blend of real-life and supernatural mayhem and there’s more than a little of a spaghetti-western vibe to the small-town/big-guns dynamic, but director and co-writer (with Pamela Diop) Jean Luc Herbulot has more in mind than a genre-bending mashup. Real-life horrors loom as large as the film’s monster, and there is one operating side-by-side with the mercenaries’ demons of the mind, some of which are eventually revealed in a genuinely powerful flashback. The special effects are both eerily lovely and genuinely creepy, which is high praise given that its physical form is one that almost always plays badly in movies; to say more would spoil the pleasure of seeing it in action. Herbulot and Diop draw on both real-life horrors and fairytale darkness, and combined with intense performances across the board the result is genuinely disturbing. Suffice it to say that the film’s most disturbing images have nothing to do with bogeymen.