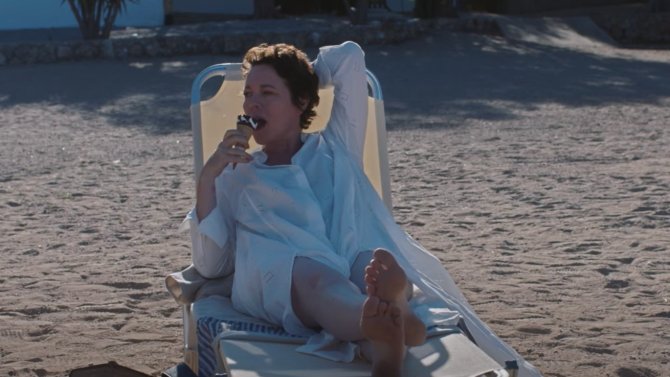 On a solo holiday to a Greek Island, literature professor Leda (Olivia Colman) finds herself both fascinated and repelled by the brash extended family that shares her local beach, encroaching on her space and hijacking her attention. When a child from the family goes missing, it is Leda, level-headed in the crisis, who finds her. But this act invites unbidden memories of her own decisions as a mother, choices that she wrestles with even now, nearly 20 years later. This sinuous adaptation of the novel by Elena Ferrante marks a supremely confident feature directing debut from Maggie Gyllenhaal, who also penned the screenplay. The two timelines – Leda present and Leda in the past (played by Jessie Buckley) – are woven in serpentine coils that twine together, in this portrait of the kind of motherhood that isn’t afraid to bare its teeth.

The marketability of Ferrante’s name, the quality of the production – Gyllenhaal has pulled together top tier talent, both in front of and behind the camera – and the tantalisingly unsettling atmosphere make for an attractive package, as evidenced by the fact that the film has already sold worldwide, with Netflix taking multiple territories including the US. Other distributors include eOne, which will release the film in the UK, Benelux and Germany, and Bim which holds the rights for Italy. Even by Colman’s high standards, this a richly complex performance. Awards notice seems likely.

There are few actors currently working to such a consistently high standard as Colman, but Jessie Buckley is another who approaches the same quality. The casting of both as the same character at different ages is an inspired decision. The performances, both angular, unexpected and sometimes jarring, tessellate together in a supremely satisfying manner, like a three-dimensional jigsaw puzzle. Leda, with her mercurial moods, her lack of impulse control and her refusal to be a nice, pliable, invisible, middle-aged woman, might be an enigma to everyone including herself. But in the hands of these two actors, she’s utterly persuasive, even when – perhaps especially when – she is behaving irrationally. Hélène Louvart’s intuitive camera constantly searches Leda’s face, finding a prickle of curiosity which draws her eyes to Nina (Dakota Johnson), the mother of the child who goes missing; a dart of irritation that warns off the men who are constantly offering unwanted assistance. Continue reading.