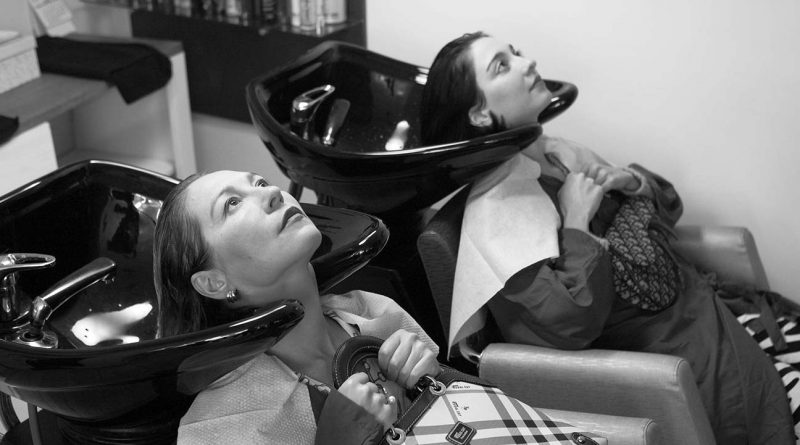 Leonor (Ulman) and her mother, Maria (Ulman’s real-life mom, Ale Ulman), live together in what appears to be a rather small apartment in Gijon, a city left reeling — like so many others — in the wake of economic crisis. As the movie unfolds, we learn that Leo had been living in London but came back home after her father’s death. Now the two women drift through their days, trying various schemes and shortcuts to keep themselves fed and sheltered. Leo discusses the possibility of paid sex work with someone she met online…but also sells a sewing machine for cash. Maria brazens her way through a fancy meal…but also shoplifts small items from the grocery store. Anything to keep the lights on a little longer.

Male characters are either targets or sources of income in the world of El Planeta; the only one with a significant amount of screen time is Amadeus (Zhou Chen), the enigmatic store clerk/intern with whom Leo forges an unexpected connection. But uncomplicated happiness doesn’t seem to be in the cards for Leo and Maria — every step forward seems to come with two steps back. Still, they have each other, and they always seem to have another idea up their fashionable sleeves.

The film unfolds in an unhurried way that feels almost improvisational; Ulman lets shots linger and doesn’t rely on exposition to fill in Leo and Maria’s story. Instead, we learn it in bits and pieces, building our own picture of who these women are and what’s shaped them. We’re never quite sure we can trust them (is Leo really an experienced celebrity stylist, or is that another con?), but that doesn’t stop us from rooting for them. — Betsy Bozdech

Loren King Amalia Ulman’s strange and seductive first feature, set in a beleaguered Spain, is a mother/daughter black comedy that borrows from Ulman’s own experience — she acts opposite her real-life mother, Ale Ulman — but the authenticity goes beyond that. The naturalistic, atmospheric, sometimes meandering film, shot in a crisp black and white, picks up when both mother and daughter are surviving by their wits, a bit of thievery and a hearty dose of denial, dining out on the tab of an unseen benefactor who may not even know them. They face eviction and have no money for food or electricity. None of this is portrayed with melodrama but rather with deadpan, absurdist humor. El Planeta is a debut every bit as original, personal and sometimes surreal as Jim Jarmusch’s or Spike Lee’s. Let’s hope Ulman gets the same critical and industry attention.

Pam Grady: Financially ruined and facing eviction, a mother and daughter in Gijon, Spain, scheme and grift their way through life in an attempt to stay one step ahead of the law and other consequences of their actions. Artist turned writer-director Amalia Ulman plays Leo, the daughter in this eccentric duo, opposite her real-life mom Ale Ulman as Maria. The women present a united front against a world they hold beneath them. The Gijon of the film is economically battered with shuttered storefronts everywhere but the overall conditions probably don’t matter. Getting jobs would not occur to these two, not when one can shoplift and grift. Yet, when a date happens to neglect mentioning that he has a wife and child until late in their time together, Leo is put out at the deception. What’s good for the goose is only good for the goose. Luminously shot in black and white, this slim drama is an entertaining character study of people without much character.

Susan Wloszczyna: El Planeta is a pleasantly quirky amuse bouche of a dark comedy shot in black and white that takes place in post-recession Spain. First-time feature director and writer Amalia Ulman and her real-life mother Ale, star as daughter Leo and matriarch Maria, who are living on borrowed time in a small apartment that they no longer can afford. Read full review.

Marilyn Ferdinand The financial crisis that engulfed many first-world countries in 2008 is that backdrop of this quirky domestic drama that sees a bereft mother and her artsy daughter trying to survive after the breadwinner of the family dies. The film is shot in black and white, perhaps to signal how life has grayed for our protagonists and our vital centers of civilization, represented by one boarded-up shop after another in the coastal city of Gijón, Spain, where this story is set. El Planeta zeroes in on the precarity of women who are dependent on men for their support, but it also critiques the exploitation of workers who are “paid” with exposure instead of money. It’s not hard to see how superstition and desperation would be the refuges for the people on the losing end of the balance sheet, though director Amalia Ulman approaches this subject with a light, distanced touch.

Leslie Combemale Entitlement has its advantages. In performance artist and filmmaker Amalia Ulman’s absurdist comedy El Planeta, Leo (played by Ulman herself) and her mom María (played by Ulman’s real-life mother Ale) have taken up shoplifting, grifts, and scams in an attempt to continue their middle class existence. That they are pretty white women is the major reason why, for the most part, they get away with it. Still, their looks and the status they present to the outside world only gets them so far, and that’s where Ulman speaks to the universal fragility of women’s place in the world. She continues her consideration of class and gender via using middlebrow aesthetics in this approachable but ultimately melancholy cinematic portrait of self delusion.

Jennifer Merin El Planeta is a fine first feature written and directed by and starring Amalia Ulman. It’s a darkly humorous dramady about a daughter (played by Ulmam) and her mother (played by Ale Ulman, Amalia’s mother in real life) who are in financial straits and who turn to grifting and hustling to try to maintain their middle-class lifestyle — and to avoid eviction. The characters and their problems are relatable — the solutions they find are wacky and foolhardy and always entertaining,

Cate Marquis Artist Amalia Ulman’s directorial debut is the absurdist black-and-white Spanish comedy El Planeta, where a young woman and her mother (the director and her real-life mother Ale Ulman) cling to the idea of their once-affluent lifestyle, despite having no money and no electricity and facing eviction, in post economic crisis Spain. In the coastal city of Gijon where they live, where vacant and boarded-up shops abound and there are no jobs, the quirky pair turn to shoplifting and grifting to get by. Meanwhile, the city prepares for an upcoming awards gala to be attended by luminaries like director Martin Scorsese and the Spanish royal family. This Sundance entry is an offbeat tale with hints of Grey Gardens.