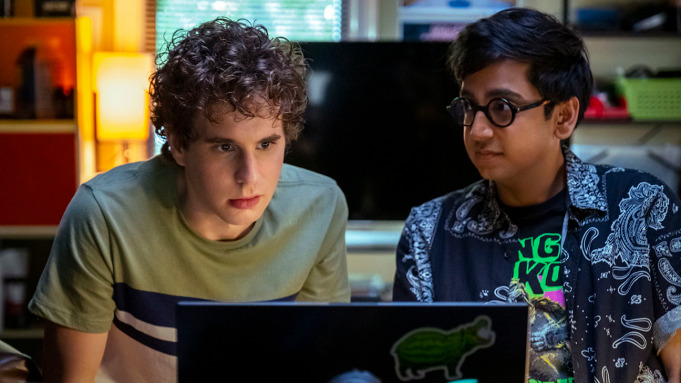 Some Broadway shows transfer admirably to the big screen. Others don’t. Actor Ben Platt won plaudits for playing the titular teenager in this coming-of-age musical, but now he’s 27 and not quite as believable as an angst-riddled high-schooler.

Opening with Waving Through a Window, the story revolves around depressed Evan Hansen (Platt), struggling through the first day of his senior year. At his therapist’s insistence, he’s written a reassuring letter to himself that’s stolen by a bullying classmate Connor Murphy (Colton Ryan) and, later, found in drug-addicted Connor’s pocket after he commits suicide.

Naturally, everyone thinks Connor has written it to his only friend Evan. Socially anxious and insecure Evan goes along with the charade, ostensibly to help Connor’s grieving parents, Cynthia (Amy Adams) and Larry (Danny Pinto,) and guitar-playing sister Zoe (Kaitlyn Dever) on whom Evan has a secret crush.

But then Evan deviously asks Jared (Nik Dodani) to create a fake email correspondence to cruelly cement Evan’s relationship with Connor, referring to a trip to Connor’s favorite orchard where Evan fell from a tree and broke his arm.

Perhaps the one saving grace is Julianne Moore as Heidi, Evan’s single mother, working extra nursing shifts so Evan can go to college, singing the tender solo So Big/So Small.

Based on a book by Steven Levenson, it’s adapted and streamlined by Stephen Chbosky (The Perks of Being a Wallflower), who cut several Benj Pasek/Justin Paul songs, like the show’s original opener, Anybody Have a Map, while adding new ones.

Admittedly, Ben father, Marc Platt, is one of the film’s producer, but he’s not the only twentysomething to play younger: Tobey Maguire was 27 as Peter Parker in Spider-Man, Rachel McAdams was 26 in Mean Girls, Jennifer Grey was 27 in Dirty Dancing.

On the Granger Gauge of 1 to 10, Dear Evan Hansen is a manipulatively maudlin, superficial 5, citing the Suicide Prevention Hotline after the end credits.