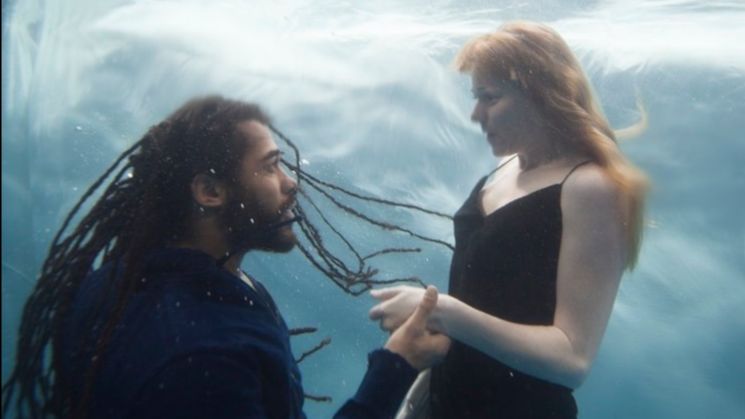 Science fiction often walks a tightrope, giving us enough information to join a story’s world while not becoming overwhelmed with unfamiliar terms or loads of exposition. The sci-fi romance Between Waves lets viewers piece together a lot on their own, which at first suits its sense of mystery, then unfortunately peters into a puzzling conclusion.

When her physicist boyfriend of five years disappears, professional photographer Jamie (Fiona Graham, A Mouthful of Air) feels adrift, eager to do more than put up fliers and wait for news. She thinks she sees Isaac (Luke Robinson, The Boys) everywhere – on the street, then the dance floor – and chases after him, but he isn’t there.

One day, she actually encounters him as he tries to ride away on a bicycle. “My research – it works,” he says cryptically, telling her he’s mapped everything out for her before vanishing again.

Making her feature directing debut, Virginia Abramovich stacks the front half of Between Waves with visual cues telegraphing Jamie’s confusion and possible instability. Glass partitions and other surfaces in her home or office reflect more than one Jamie or another character. Jamie pops pills that her co-worker (Sebastian Deery) supplies, imagines a rope dragging her deep underwater in the bathtub, and keeps remembering her mother’s tragic death when she was a child.

She also remembers how she and Isaac met, the warmth of their relationship intercut with a tender scene of them dancing, another of them arguing, and glimmers of a car crash on a rainy night.

Isaac was researching quantum realities, and Graham and Robinson generate flirty sparks as he explains how different choices lead to parallel universes, ones that might converge if a person’s choices align. However, the script by Abramovich and Katherine Andrews (Just Passing Through) keeps Isaac’s theories vague, beyond hints of government investors and a laconic research partner (Stacey Bernstein).

The plot also is sketchy about what Jamie discovers as she heads to the Azores, where she and Isaac had planned a vacation. She sees different versions of herself and him as she follows a map of their itinerary, tacking up sticky notes on the walls and windows and marking an “x” in the sand or the furniture to help her discern what’s real. Meanwhile, a detective (Edwige Jean-Pierre) tells Jamie they’ve found Isaac’s body and consider his death a homicide.

Breaking Waves creates some compassionate moments between Jamie and Miguel (Miguel Damião), a barkeep in the Azores who lost a loved one to the sea and in his grief thinks he still sees her, too. But overall, there’s so much unclear about Isaac’s discovery and Jamie’s detective work that even the emotional resolution feels more ambiguous than satisfying.