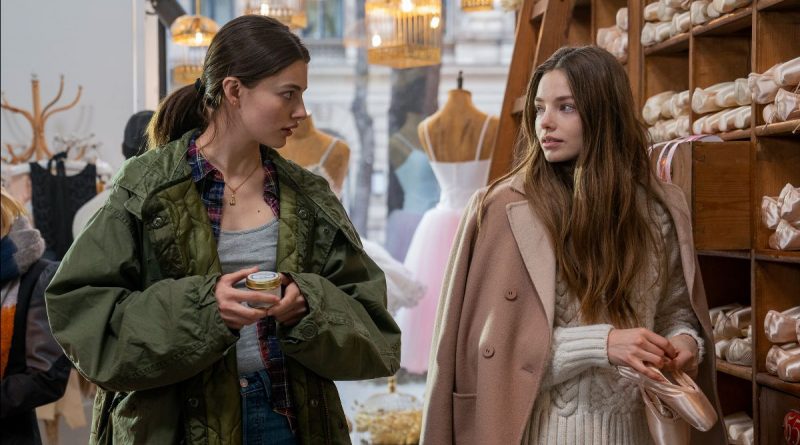 Based on the 2019 young-adult novel Bright Burning Stars by A.K. Small–herself dancer with The Richmond Ballet Student Company and, briefly, Pacific Northwest Ballet–and directed/co-written by Sarah Adina Smith–Birds of Paradise treads the well-worn path blazed by films ranging from The Red Shoes (1948) to Center Stage (2000) and Black Swan (2010)–the one powered by the refrain that ‘everything is not beautiful at the ballet.’

Fresh from Virginia, 18-year-old Kate (Diana Silvers) arrives on the doorstep of her new home–the renowned school of the internationally-acclaimed Paris Opera Ballet–with a scholarship, burning ambition and a neatly packed bag in hand. Her introduction to French student Marine (Kristine Froseth) is less than promising, so naturally they quickly discover that–surprise!–they’re roommates and L’Opera’s very-French, suck-it-up-buttercup rules do not do not bend for nonsense like switching accommodations because you don’t like your roomie. That’s three centuries of tradition speaking and rebellion is not rewarded; not for nothing are the students to whom the French refer to as les petits rats… a tradition evoked by the pet rodent kept by one of the school’s imperious faculty.

Rocky first meeting notwithstanding, the two girls become fast friends, though their friendship rests on a perilous foundation: Only one student per year is selected to join the company’s corps de ballet–the lowest rung on the ladder–so all relationships are colored by the relentless competition to master increasingly difficult positions and movements yet perform them with apparently effortless grace. Everyone is a bitch–boys and girls alike–and of course Marine and Kate come laden with baggage. Kate is the tall, lanky, athletic daughter of a struggling, blue-collar father and comes from America–home, one instructor sneers, of emphasis on athleticism rather than aesthetics (a none-too-subtle dig at the stereotype of Balanchine-inspired choreography and no-frills costuming)–while Marine is an ambassador’s child, petite and schooled in the French tradition of prettiness and decorum. And, of course, while students may be friends, each one who gives up or is injured out (cut to the montage of students limping or morosely shuffling away through the school’s imposing gates) is one fewer set of eyes on the prize. Kate knows her scholarship is the only way she can pursue her expensive dream (the cost of pointe shoes alone is daunting, let alone room and board) and wonders if she deserves her father’s sacrifices; Marine is tormented by both the death of her twin brother, also an aspiring dancer, and the vicious gossip about the reason he committed suicide. So much drama!

And more to the point, familiar drama; there are always mean girls and boys, imperious faculty and relentless competition, along with accidents, substance abuse and sabotage: Not only can there be only one etoile, but the slots for soloists and corps members are also finite. It’s not an inherently bad formula–one elastic enough to work for stories about students of dance, theater, film and music–but it’s still a limited one and if it’s your cup of tea you’ve probably already seen it in action. That said, leads Silvers and Froseth deliver excellent performances and it’s a pleasure to see Jacqueline Bisset glide through the small but memorable role of imperious faculty member Madame Brunelle. And Birds of Paradise is beautifully made (even if it works the birds metaphor pretty hard) and never succumbs to the temptation to make the ballet world more “accessible” by revolving around an implausible outsider–I’m looking at you, Flashdance, and other misguided attempts to make the “stodgy” world of classical dance more relatable by focusing on a rebel whose mission is to make it less classical dance-y.