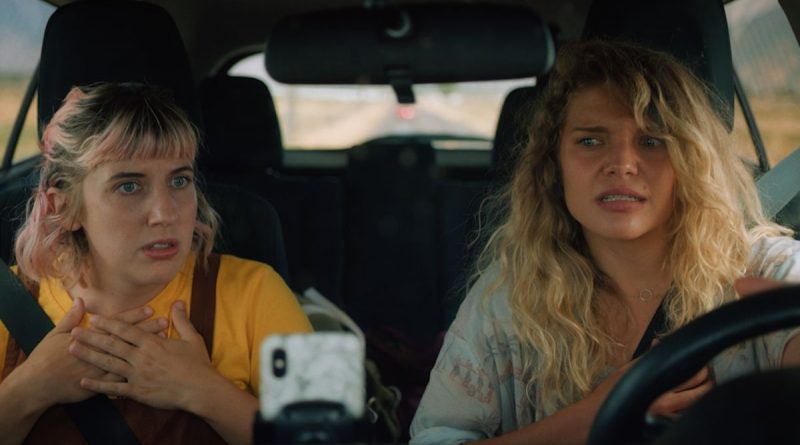 It takes some mega moxie to put the pedal to the metal for a road-trip comedy set during the scary early days of the COVID-19 outbreak. But somehow Stop and Go, whose unfortunate too-on-the nose original title was Recovery, delivers just enough relatable amusement and zesty fun thanks to its leading ladies and screenwriters, Whitney Call and Mallory Everton, who co-directs with Stephen Meek.

When we first meet these sisters, Call’s Jamie is celebrating her 30th in February 2020, two weeks before the pandemic shutdown in March. Meanwhile, Everton’s Blake is basking in the glow of a promising first date with a guy she met on Tinder. But life as they knew it is put aside, as the siblings swiftly shift their priorities as they spray down their clothing and various surfaces with disinfectant, don masks, shop for whatever is left on the grocery shelves, amuse themselves with jigsaw puzzles, sport comfy clothes and try not to touch their faces.

Washington State is in the midst of an outbreak. They quickly prepare for the 20-hour drive from their home in Albuquerque to rescue their beloved granny as we join them in their in SUV quarantine. Distractions include a rather random play list of songs, a strange audio book that is obsessed with waterside docks. However, grade-school teacher Jamie must first drop off her classroom mice at a student’s home, much to his mother’s chagrin. Meanwhile, their clueless and self-centered older sister Erin (Julie Jolley) is in the midst of an ocean cruise with her husband.

Sundry kooky characters beyond Erin pop up, such as masked stranger who stares at Blake as she nervously negotiates the act of pumping gas into their car while wearing snack-size plastic baggies on her hands. Then there is a strange male character who is dog-sitting granny’s Bernese. Dr. Fauci and Tom Hanks are name-dropped during the course of this 80-minute rescue mission that mostly ends well. And the sooner we can forget the motorcyclist who mistakes Blake’s honking as an act of aggression and ends up spitting in the women’s face the better. Helping visually are the wide open spaces with plenty of breathing room as the pair wind their way up the northwest portion of the country.

In other hands, this sort of jaunt might teeter on the edge of being offensive, especially since we are far from conquering this deadly disease. But our heroines, who have known one another since they were nine, have a distinctive natural rapport with each other as the end credits run over home movies from their youth. Yes, the jokey bits don’t always hit the spot, but their hearts seem to be in the right place.