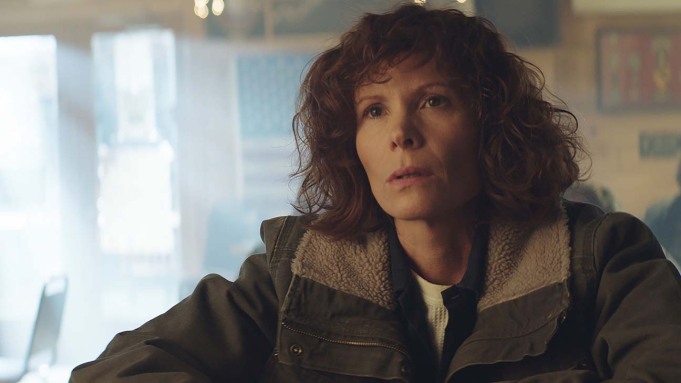 Sometimes a movie reminds you of other, better, movies.

Sometimes that doesn’t matter. But sometimes it does.

Both reactions fit Through the Glass Darkly, a sporadically affecting, yet often affected, mash-up of film noir, Southern Gothic and psychological thriller elements.

Despite its title (only a tiny article away from Ingmar Bergman’s 1981 classic Through a Glass Darkly), the movies director Lauren Fash’s feature debut recalls range from Memento to Three Billboards Outside Ebbing, Missouri.

This time, however, we’re in cut-off-from-time, small-town Elroy, Ga., where anguished mother Charlie Glass (Robyn Lively) is still searching for her missing daughter Lily a year after Lily disappeared. That is, when Charlie’s not drowning her sorrows at the local bar.

Charlie’s got a lot of regrets to forget — not only her daughter’s disappearance but the shattering impact it had on her bond with wife Angela (Bethany Anne Lind).

Whenever Charlie runs into the local good-ol’-boy sheriff (Stan Houston), she demands to know why no one else in town seems to care about finding her daughter.

But it’s a different story when another local girl vanishes.

That’s because this girl’s the granddaughter of Elroy matriarch Mama Carmichael (Dana Ivey), who runs the resident whiskey distillery — and everything else around, especially her good-for-nothing son Trip (Michael Trucco).

Charlie thinks the two mysterious disappearances must be related. So does the sheriff — who naturally suspects Charlie.
Charlie, also naturally, embarks on a quest to find the truth, aided by a plucky TV reporter (Shanola Hampton).

If only Charlie could solve the puzzle of her own disjointed mental state — and the strange, sudden visions she keeps having. Is it because of all the drinking? All the prescription pills she keeps gulping? Or something else, something more ominous?

From its jaded voice-over narration to its stock small-Southern-town supporting characters, the movie’s script (by director Fash and Susan Graham), covers familiar territory.

Through it all, however, Lively’s compelling performance powers Through the Glass Darkly. As she filters Charlie’s heartache and determination through layers of doubt and confusion, Lively helps us see a clear picture — even when her character, and the movie she anchors, can’t.