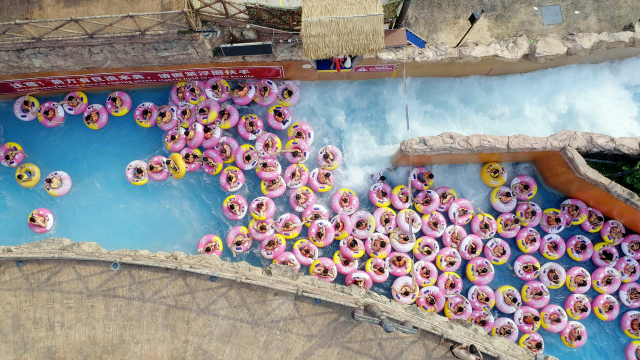 In an extraordinary sequence in the verite documentary Ascension, factory workers in China assemble adult female sex dolls that appear to be made of silicone. As the shimmering mannequins are laid out on metal tables like cadavers, their legs upended, the mostly young women labor over them, carefully painting their nipples (“Let’s try the number 3 pink”), affixing wigs, screwing on heads, and taking photos with their cell phones, presumably for quality control. But even this fascinating glimpse at an assembly line in modern day China isn’t the most disturbing: there are workers cutting up cooked chickens, processing plastic caps, dumping massive amounts of plastic bottles into bins, punching rivets into denim seams. Jessica Kingdon’s observational documentary isn’t billed as an environmental film. But, without commentary, it offers searing commentary on waste, on consumption, on soul-crushing, mind-numbing work.

From the opening scenes of barkers trying to lure workers to factories and plants for low wages, promising perks like free wifi or sitting privileges, the film offers a rare look inside contemporary China. Young people aspire to a higher standard of living but places of employment are still controlled by the state and authoritarian bosses. Their employees are indoctrinated to obey a strict company ethos. It’s had not to sympathize with the workers. But it’s also depressing to see the global economy in action, from the rote production of “Make America Great” stitching — in China, of course — to the machines that spit out millions of plastic pieces that are fit into millions of other plastic pieces.

Ascension is remarkable for the access we’re granted: not just inside factories but in many areas of training the Chinese labor force. In another surreal sequence, young Chinese men and women seeking employment as personal assistants practice saying “Dinner is served” in English while their instructor tells them that their duties may include squeezing toothpaste from a tube for their employers. As a shorthand explanation for dedicated service, she asks if anyone has watched Downton Abbey (no one has).

Ascension unfolds without narration or story but it speaks volumes. It’s a direct descendent of the observational documentaries of the great Frederick Wiseman. It also fits with the storied tradition of American documentaries about dead end jobs and failed economic promises, such as American Factory (2019); Barbara Kopple’s American Dream (1990 ); and Lee Grant’s Down and Out in America (1986).