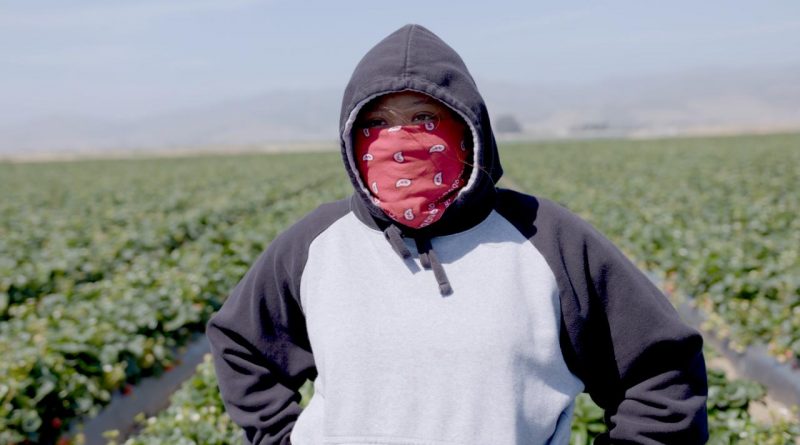 Whenever I pick up strawberries at the supermarket, I always check to see where they’re from.

That’s because I’m from California’s Orange County, where strawberries once reigned as a leading agricultural crop.

These days, subdivisions have supplanted strawberries (and citrus) in Orange County — and Northern California’s Watsonville reigns as a strawberry capital. (The locals call it “Fresaville,” using the Spanish word for “strawberry.”)

But now that I’ve seen Fruits of Labor, whenever I pick up a box of strawberries, I’ll be thinking of Ashley Solis Pavon.

She’s the focus of director Emily Cohen Ibanez’s documentary, a days-in-the-life portrait of a high school senior whose life is a far cry from the carefree teen sprees usually seen on screen.

Sure, Ashley’s excited about finding the perfect sparkly prom dress. She likes to get her nails done and basks in the quiet affection of her boyfriend Adrian.

But she’s also anxious about being able to graduate with the class of 2018 — in part because she spends her overnight hours working the graveyard shift in a strawberry processing plant to help support her family.

She also toils in the Watsonville strawberry fields that seem to go on forever, carefully picking ripe berries and packing them in plastic boxes destined for grocery shelves.

After a shift, “my body stinks of strawberries and work,” Ashley admits. But it’s tough to get into the shower — because 12 people share the one bathroom in their run-down house.

At 18, Ashley’s the oldest of four siblings. Her 16-year-old brother Ashford concentrates on skateboarding, video games and his girlfriend Ximena. (And what happens if Ximena gets pregnant?)

Mom Beatriz, stoic and careworn, is too busy cleaning homes seven days a week in coastal Santa Cruz and Monterey to spend much time with Ashley, Ashford and their younger siblings Ashlynn and Ashby.

All the kids’ names begin with “Ash,” symbolizing the roots Beatriz hopes her children have in their birthplace, the U.S. As an undocumented native of Mexico, however, Beatriz is plenty worried about what will happen if immigration authorities deport her, as they did a neighbor.

Co-written by Ashley herself, with pensive and sometimes poetic narration that reflects her ancestors’ storytelling traditions, Fruits of Labor offers an intimate look at those struggling to even have a chance to achieve dreams so many others take for granted.

Throughout the documentary, director Ibanez pairs voice-overs from Ashley and Beatriz with vérité footage depicting their day-to-day challenges.

These slices of life are never less than intriguing. But Ibanez distractingly augments them with symbolic animated and time-lapse sequences that show blossoms blooming, butterflies emerging from cocoons and other arty images that undercut the narrative’s true grit.

Throughout, there’s also a disconcerting tendency to tell rather than show, as when Ashley finally makes it to the prom, after all the preparation and primping and anxiety, and — boom! — it’s graduation time!

Despite these distractions, however, Fruits of Labor delivers a frequently moving portrait of personal growth — and undeniable food for thought.