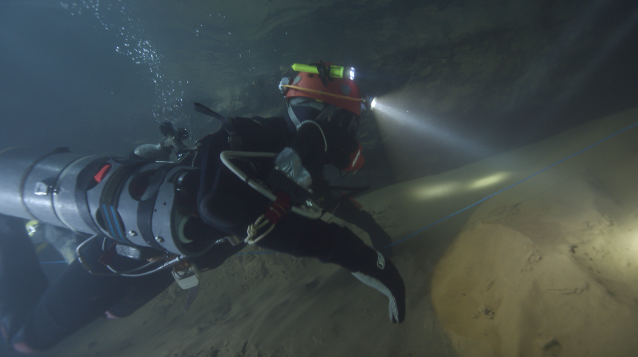 The thing that seems to interest co-directors E. Chai Vasarhelyi and Jimmy Chin is capturing human tenacity. Whether it was Alex Honnold in their Oscar-winning film, Free Solo, or The Rescue, their latest film that details the story of a group of unlikely heroes who banded together with strapping military forces from America, Australia, and beyond to help Thai Navy Seals strategize and rescue a boys’ soccer team.

The Thai boys soccer team rescued from the Tham Luang cave was a dominant news story in 2018. However, this upfront and immersive documentary from Vasarhelyi and Chin deserves award recognition. The tension in the story’s arc behind The Rescue, the cultural friction, and the problematic extraction solution’s execution are expertly lensed and fairly presented. And if not for the organized mind and utter “buttinski” insistence of one Vern Unsworth, a cave expert and ex-pat Brit in Thailand, this entire team of boys most likely would have perished.

What Vern had was knowledge. The cave’s hairpin turns and labyrinthine layout, his personal experience navigating it, and understanding the lurking doom factor of monsoonal rains due any minute seeping through the limestone structure to flood the entire underground cave.

But most importantly, he knew the right people: a select group of men whom he organized to come to Thailand at a moment’s notice. So even at the end of the film, the b-roll showing the Queen pinning medals on the brave British divers and the Thai news celebrating their Navy SEALS, Vern Unsworth’s efforts set it all in motion, and it worked.

The Rescue hits the viewer hard, as it plays like a good thriller, but this event and the footage were all 100% real. A writer’s pen gooses nothing. Instead, they capture the whole sideshow surrounding the initial news that the team was trapped and missing. The parents’ grief, the Thai officials’ confusion to cede any solutions to the outsider Brits, retired SEALS willing to volunteer, the worldwide media circus, even a holy man from Myanmar carted in to offer worried some hope and blessed bracelets.

But the stars are this core group of middle-aged men from Britain, socially awkward, fiercely intelligent, BCRC divers Richard Stanton, Robert Harper, John Volanthen, aided by Belgian cave diver Ben Reymenants and French diver Maksym Polejaka, who happen to dig diving in murky water, confined spaces and pitch-black unknowns that would make anyone with a hint of claustrophobia hurl. Their interviews, insights, and, most importantly, the fact that they stuck with the Thai officials even when they pushed back and dismissed them for a moment are a testament to the strength of their character.

The Wild Boar soccer team and their coach managed to keep their cool despite being in a slightly-above-water dry spot as more water began to roar into the cave thanks to the early arrival of monsoon season. The currents ripped off the face masks of divers. Two Thai Navy SEALs drowned inside the cave not that far from the cave’s mouth. And all the while, Herculean efforts to pump out water and divert it by a team of volunteers were remarkable and beneficial, but the constant influx of water kept drowning a growing threat.

This film honors the unlikely crew of competent men, all of a certain age, who responded and came to aid the Thais without the promise of a payday. The word “generosity” comes up frequently in translated interviews with the Thais who described these men. It’s fitting and accurate.

We get to know retired firefighter Rick Stanton, and a record-holding cave-diver and IT consultant, John Volanthen. Later on, Rick’s Australian friend, Dr. Richard Harris, balks at first at Stanton’s crazy idea to sedate the boys with a cocktail of medicines. But he comes to Thailand, sees what they are up against, and then dives with the men to suit the kids up with oxygen and watertight suits and masks so they can make the 2.5 miles underwater swim back to the cave opening. Harris was unsure it would work at all, and he described the first child going out this way as a bad feeling—akin to euthanasia—as he tied the unconscious child’s arms behind them as not to get caught on the rocks. Until that first boy made it to the cave mouth alive and well, his underwater journey and the subsequent rescues are insanely harrowing.

The Rescue artfully balances all this thrilling edge-of-the-seat narrative with a poignant message that most people are good at the end of the day. And when there is a significant and tragic or potentially tragic event, people tend to come together to aid their neighbors and even strangers. And the among them are E. Chai Vasarhelyi and Jimmy Chin’s true cinematic superheroes, The Rescue‘s generous and kind stars of the universe, minus any big Hollywood paydays or technicolor CGI.

The Rescue is truly one of the best films of this year.