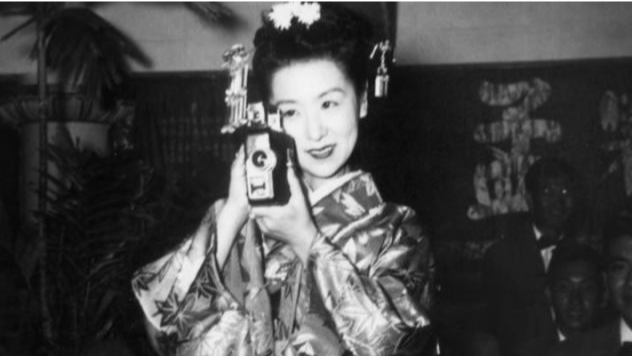 2021 was the year the film world rediscovered Japanese actor and director Kinuyo Tanaka. Tanaka acted in more than 200 films for some of the greatest directors Japan ever produced during a career that spanned from 1924 through 1976—just a year before her death. Her work as a director, however, is largely unknown, but thanks to the restoration of some of her films by The Japan Foundation, audiences are gaining access to her ground-breaking work.

Kinuyo Tanaka was born in Shimonoseki, Yamaguchi, Japan in 1909. She began her acting career in 1924 at the age of 14 by making women’s films for Shōchiku Studios, her professional home until 1950. Through the 1930s, she acted in romantic melodramas that made her so popular that the studio sold their films by including her name in the titles: The Story of Kinuyo (1930), Kinuyo the Lady Doctor (1937), and Kinuyo’s First Love (1940).

In the lead-up to World War II, Japanese society was undergoing seismic shifts, including in its attitudes toward women. Tanaka’s roles reflected some of these shifts, playing both modern women and, in a reactionary phase during the war, traditional wives and mothers. Following Japan’s defeat, the propaganda war shifted to Allied ideas of democracy and women’s equality, and Japanese films followed suit.

Tanaka appeared in a so-called “women’s liberation” trilogy by master director Kenji Mizoguchi comprising Victory of Women (1946), The Love of Sumako the Actress (1947), and Flame of My Love (1949), in which she played, respectively, a lawyer, an outspoken actor performing Western-style plays, and a political organizer. When Mizoguchi cast her as a prostitute in Women of the Night (1948), Tanaka shed her sweetheart image by confronting Japanese society with the problems facing women in a broken postwar economy.

Tanaka had her most fruitful years acting in Mizoguchi films (14 in all), including certified masterpieces The Life of Oharu (1952), Ugetsu (1953), and Sansho the Bailiff (1954). However, she was a favorite actor of many renowned Japanese directors, including Yasushirō Ozu, Mikio Naruse and Hiroshi Shimizu.


IN THE DIRECTOR’S CHAIR

Like many female actors entering middle age, Tanaka turned to directing when good roles stopped coming her way. She wanted to create a wider range of stories about women than could be found in most Japanese films. In The Eternal Breasts (1955), she engaged female screenwriter Sumie Tanaka to write a drama based on the life of poet Fumiko Nakajō (played by Yumeji Tsukioka) and her diagnosis of breast cancer and loss of both breasts.

Tanaka continued working with women, including screenwriter Yana Masako, who wrote Girls of the Dark (1961), a film critical of the hypocrisy of Japanese society toward prostitutes whom it reformed only to exploit in “respectable” work, and producer Hisako Nagashima, who suggested the story for her last film as a director, Love Under the Crucifix (1962). Ninjin Kurabu, a film company founded by three actresses, Yoshiko Kuga, Keiko Kishi, and Ineko Arima, produced the film, a historical romance of thwarted love that rails against social oppression.

Tanaka has re-emerged as an important figure in world cinema. The 2021 Lumière Festival in Lyon, France, presented a retrospective of all six of the films Tanaka directed as part of its “The Permanent History of Women Filmmakers” series, including her first effort, Love Letters (1953), which was accepted into competition at the 1954 Cannes Film Festival. The Deutsches Filminstitut & Filmmuseum presented the same six films in its Nippon Connection festival, as well as a film in which she starred, Sandakan No. 8 (Brothel No. 8, 1974), and for which she won the Silver Bear for Best Actress at the Berlin International Film Festival. In her own country, the Kawakita Film Museum in Kamakura City mounted a special exhibition in the second half of 2021 about Tanaka, who lived in Kanagawa Prefecture and is buried in Kamakura City. Kinuyo Tanaka was perhaps the most popular female actor of 20th-century Japan, but by aligning herself with directors who gave her opportunities to bring range and depth to the characters she inhabited, she grew as an artist. Even so, she continued to develop by taking what she learned as an actor and, working with other women behind the camera, directed stories about women that ranged far beyond what could be found in Japanese films (or indeed other nations’ films) at the time. — Marilyn Ferdinand