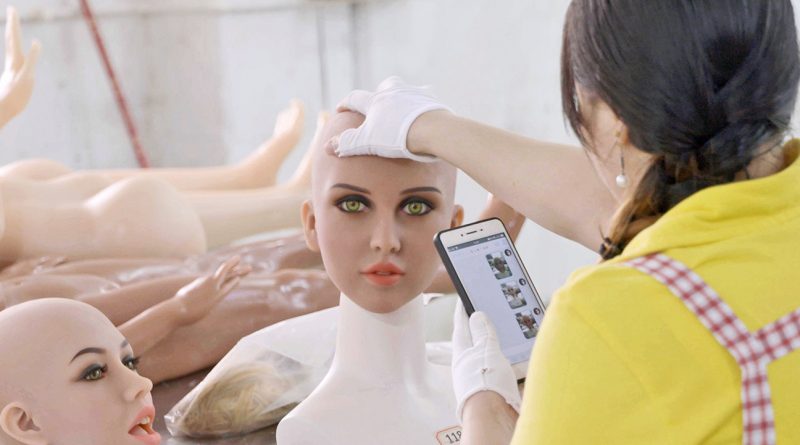 Kingdon eschews voiceover narration and talking-head interviews, letting her footage speak for itself. Early scenes of workers being recruited to work in massive production plants (where everything from meals to accommodations is provided — but the company can dictate your appearance and behavior) segue into mesmerizing sequences of consumer goods being churned out. Some of it is beautiful, some of it is junk, and some of it is eyebrow-raising. But whether they’re pressing rivets into stacks of blue jeans or painting a sex doll’s areolas the perfect shade of dusty pink, the Chinese workers captured in Ascension approach their tasks with practicality and focus: The work has to be done, and someone has to do it.

The film conveys a sense of contemporary Chinese people knowing — and being satisfied with — their place in the country’s socioeconomic structure. There are opportunities to pursue ambition and “better yourself,” but trainees in bodyguard and butler programs are also clearly reminded that they’re considered lesser than the wealthy employers they’ll eventually serve. There’s no obvious sense of dissatisfaction at this divide; in fact, the only person who specifically voices a desire for more freedom is a rich woman dining in luxury. But is that because people aren’t experiencing those feelings or because they aren’t given the opportunity to speak about them?

So, it’s possible that interviews might have offered a bit more context to the portrait Kingdon has painted in Ascension. But that doesn’t detract from the compelling nature of her vision of the modern “Chinese dream.” Consumption is king, branding is everything, and contributing to the country in whatever way you can (while maybe getting to have a little fun) is the prime directive. — Betsy Bozdech

Pam Grady: Jessica Kingdon skips the commentary in her documentary feature debut, instead letting her images tell the story as she casts her gaze on China, caught in the grip between tradition and a rapidly changing world. Much of the focus is on work, from streetside recruiters seeking workers to man the factories (and live in dormitories) that manufacture much of the world’s consumer goods to a seminar on monetizing one’s own personal brand to business etiquette brought down to the granular level of how to smile and hug. And who knew that much work went into creating a latex sex doll? Globalization has created a tsunami of change throughout the world and that might go doubly for a country where tradition, hyper-capitalism, social media, and authoritarian politics so freely mix and mingle. It is a sea change Ascension grippingly portrays.

Sandie Angulo Chen: Ascension is filmmaker Jessica Kingdon’s fascinating and provocative observational documentary about life and work in modern-day China. The film captures moments from various jobs, factories, training seminars, and even social media influencers’ living rooms – all pursuing the Chinese Dream, and how that compares to other cultures’ dreams, particularly the legendary American Dream. One memorable sequence takes place in a factory that makes custom sex dolls (all of them White and therefore presumably headed to customers in the West). Another stand-out vignette takes place in a training seminar that teaches prospective butlers how to work for rich employers (the takeaway being that you can curse the boss behind his back but must always appear obedient to his face). Well-crafted and impressive.

Susan Wloszczyna: Early on, the documentary Ascension points its lens at a sign on that refers to the Chinese dream as opposed to an American one when it comes to capitalistic enterprises. Part Konyaaisqati, part Ron Popeil infomercial, Jessica Kingdon’s debut feature eschews any narration while allowing viewers to immerse themselves in an amusing, sometimes upsetting and often fascinating look at what this Asian powerhouse’s idea of commerce in the 21st century. Read full review.

Leslie Combemale The entire film has such a hypnotic quality that the information about consumption, and the questions about human value, negative and hyper-gendered norms, and the perpetuation of sub-human working conditions come and go. When the film is over, all those questions weigh heavily, as they should. Read full review.

Jennifer Merin Jessica Kingdon’s brilliant and sometimes shocking assemblage of images, presented without mindboggling voice over narration, serves as a sort of guided meditation, one that gives the viewer time and space to reflect on what is being called the ‘Chinese dream,’ and how it compares to the ‘American dream.’ As an outsider observer, Kingdon’s insider access is remarkable. The film is fascinating. Read full review.

Loren King Ascension unfolds without narration or story but it speaks volumes. It’s a direct descendent of the observational documentaries of the great Frederick Wiseman. It also fits with the storied tradition of American documentaries about dead end jobs and failed economic promises, such as American Factory (2019); Barbara Kopple’s American Dream (1990 ); and Lee Grant’s Down and Out in America (1986). Read full review.

Liz Whittemore Filmmaker Jessica Kingdon must be one hell of a smooth operator to have gained access to some of China’s largest factory floors. From the assembly lines to military-style training practices, uniform and all, Ascension paints an eerie picture of what “The Chinese Dream” looks like. Read full review.

Cate Marquis Jessica Kingdon’s stunning documentary has no narrator to explain what you are seeing but may not really need one. It opens and closes with quotes from a 1912 poem, Ascension, from the filmmaker’s great-grandfather that serves as a sort of warning that what you might find when you, the warrior, finally reach the top of the rampart might be more devastation. Read full review.