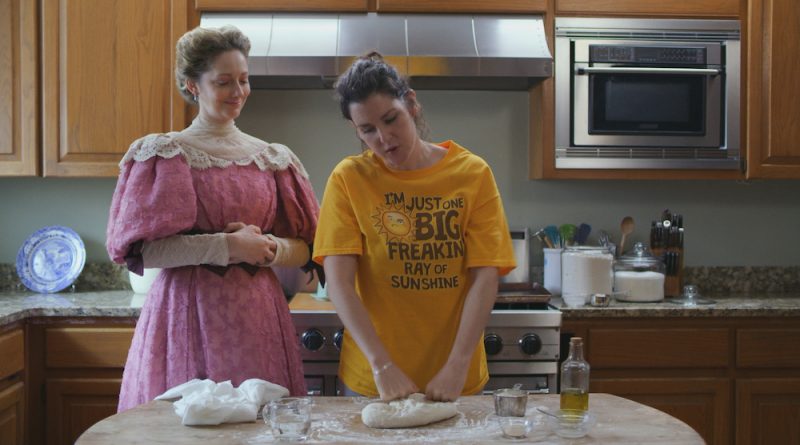 Since filmmaking brothers Justin and Christian Long are from Fairfield, Connecticut, friends and neighbors have expressed interest in their wannabe buddy comedy, set in Savannah, Georgia.

The story ostensibly revolves around Hannah (Melanie Lynskey), a crass, weed-smoking slacker who drops a drug delivery in the wrong residence, a house that’s been set to trap a child-molester. Hannah’s subsequent designation as a predator, forced to register as a sex offender, turns out to be the first joke in the lame script.

Then, as Hannah drowns her sorrow in drink, she’s approached by handsome Tanner Wadsworth (Ryan Phillippe), spoiled heir to the Civil War-era Wadsworth Manor. Eager to lure Hannah into bed, he offers her a job as the historic mansion’s live-in tour guide.

Soon after observing the sloppy stoner’s disrespectful impersonation of her, the ghost of legendary Lady Wadsworth (Judy Greer) appears in spectral form, offering to tutor Hannah in everything ladylike – from proper decorum to diction.

(The juvenile Long brothers find it hilarious that the word ‘diction’ has the word ‘dick’ in it, particularly since Hannah collects vibrators, two fashioned with faces of Judd Nelson and Tom Selleck.)

Recognizable as spokesperson for Apple Inc., Justin Long surfaces as Max, a nerdy history professor who, inexplicably, finds Hannah appealing. Plus there are the Black descendants (Tamara Austin, Wallace Jean) of Lady Wadsworth’s favorite slave. And Luis Guzman does a cameo as a bartender.

This paranormal fantasy has only two saving graces: Judy Greer’s mobile face and the bloopers that run during the end credits, demonstrating that the cast had far more fun working than audiences will have watching.

Not surprisingly, in the Lionsgate Directors Statement, the Long brothers designate this as a brand-new genre: a “fart-warming comedy.”

On the Granger Gauge of 1 to 10, Lady of the Manor is a tedious, contemptuous 2, streaming on Vudu, Prime Video and Apple TV.