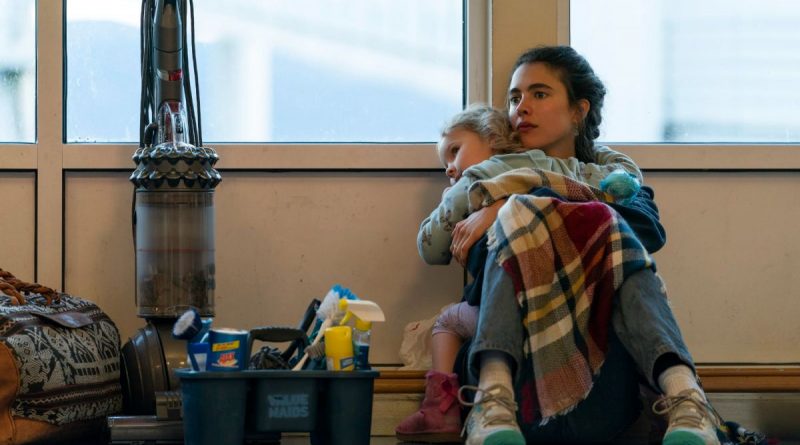 The creator of Maid, Molly Smith Metzler, wrought fiction from Maid, a good book of facts about poverty in America. Although it’s best to remember that the television series is not the book (kind of like Nomadland“, the Netflix series sincerely studies poverty — especially its burden on women.

Stephanie Land’s 288-page book is tight and tense, emphasizing every word of the subtitle: Hard Work, Low Pay, and a Mother’s Will to Survive. The maid stands front and center, nearly alone throughout, but an episodic television series cannot be built from a written work wherein the protagonist talks to the reader but barely anyone else.

Netflix’s Maid blooms into 10 parts with a huge cast and many changes from the book’s trajectory, although hard work and low pay and an especially loving young mother reign as themes.

Margaret Qualley plays Alex, Land’s surrogate. Qualley dominates every scene. Her pretty face barely reflects Alex’s multifoliate stresses but well records the duplicity of having to be nice. Alex deals with insane bureaucracy (she must have a job to prove she deserves support for daycare to get a job) and an insane family. Qualley’s mother, Andie MacDowell, as Alex’s mother, is especially scary when manic. Billy Burke covers Alex’s father, and Raymond Ablack well plays her manfriend.

Anika Noni Rose stands out as an employer, a Black woman paying a white one to clean (that should ignite conversation). Applause also goes to Rylea Whittet, who plays Maddy, nearly three. As Maddy’s daddy, Nick Robinson manages to make the souse and the louse almost sympathetic.

As creator, Metzler (one of the five writers) effectively pings through the fourth wall with notes in the screen’s upper right-hand corner, for example, of Alex’s mental subtractions from the $18 she has in her pocket.

Directing credit goes to five people; however, the series does not seem disjointed. It does, however, deflate at times, its subtleties subsumed in its inflated storylines. What is not lost is Alex’s struggle to survive while wrestling with government programs and demanding families and the self-determination to write. Land’s intense book horrifies and triggers through her self-depiction as maid, mother, and martyr. Metzler’s “Maid” broadens the picture to damn an entire culture that further stomps on the down-trodden.