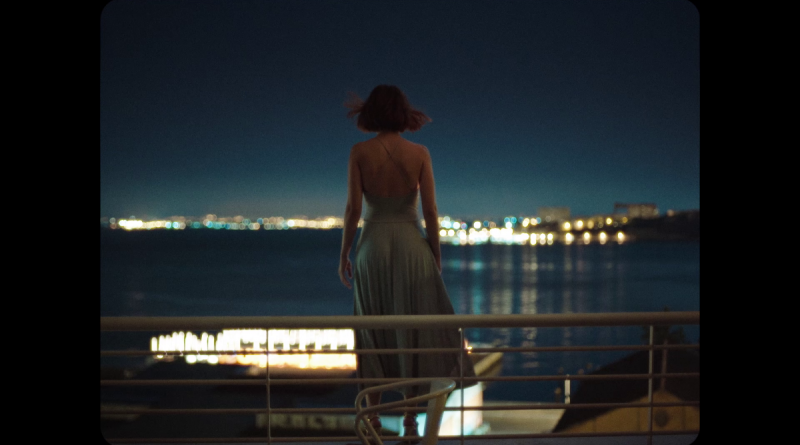 With a slender run-time just under an hour, Portuguese filmmaker Carlos Conceição packs more punch in the dark, sexy and at times just enigmatically bewildering Name Above Title than films that run for twice its length. The word “giallo” is thrown around a lot – far too much, I’d suggest – in contemporary horror discourse, the specificity of the popular Italian film category that boomed in the 1970s with an emphasis on sex and violence / style over substance now seemingly used as a descriptor for any contemporary horror film that uses non-naturalistic lighting (A jewel-colored lighting gel? GIALLO! The combination of sex and horror presented in a magazine-gloss aestheticized way? GIALLO!). So with this disclaimer firmly in place, it is not a casual manner in which I suggest that yes, there is an element of the neo-giallo to Name Above Title; something about its sensibility, its textures, and its ambience seem to tick that box much more than its surface aesthetics and actual narrative content.

Not that Name Above Title is particularly lacking on any of these fronts, either, as deliberately opaque as it is at times (especially its final act, which will stay with me for a long time as I work my head around it). Aside from its breath-taking cinematography and a cast of beautiful young things that by anyone’s standards could easily be supermodels, the most immediately noteworthy formal feature of Name Above Title is its almost complete lack of dialogue. But this doesn’t feel like a forced novelty; in fact, something about the absence of a dialogue-heavy screenplay has a sense of liberation to it, allowing us to indulge in the film’s primary strength which is, of course, its visual qualities and its use of music.

Blush-inducingly handsome French actor Matthieu Charneau plays Candide, a serial killer whose crimes against women have a strong sexual component as he seeks to choke them with wire mid-coitus. Returning to urban Lisbon from the countryside where he has committed what we assume is one of many of these murders, he finds, lying on the ground a beautiful young woman in her final moments, a young woman who we saw in the opening moments of the film hurl herself off the rooftop of a building during an elegant party. Gently lifting her head, she whispers something to him and he kisses her, all caught on video by the seemingly omnipresent gaggle of smart-phone wielding bystanders. One of these is a popular social media influencer with a large following, and Candide becomes an overnight sensation, a supposedly romantic figure who granted this young woman a gentle, intimate encounter before she died. But not all the attention Candide receives is appreciated, as an attentive investigator begins to follow him, sensing something isn’t quite right. And, as he soon discovers, it sure as hell isn’t.

Now playing at the Nightstream virtual film festival, Name Above Title is bold, daring, wild, dark, sexy and perversely fun, all with an unexpected climactic twist that plants the film firmly in the territory of the audacious. Eurosleaze for a new generation, the spirit of neo-giallo is strong here, and along with filmmakers such as Yann Gonzalez, Nicolas Pesce, Peter Strickland, the Onetti brothers, and Hélène Cattet and Bruno Forzani, Conceição’s film is proof that neo-giallo – true neo-giallo – is a growing, enthralling, formally ambitious and conceptually dazzling terrain.