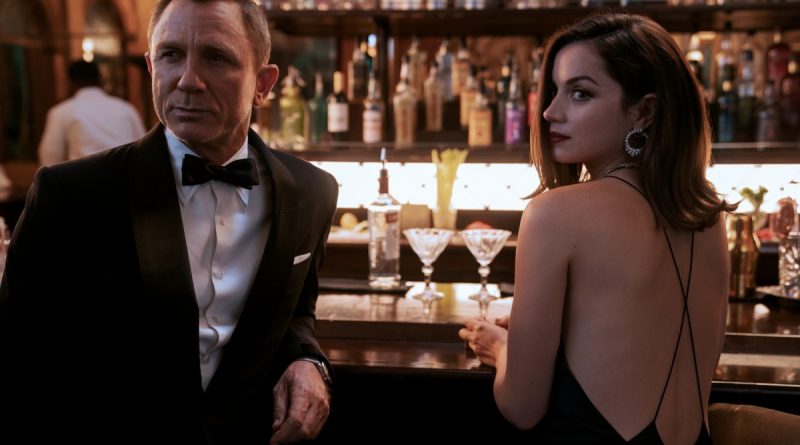 James Bond is back and saving the world from another diabolically convoluted scheme in “No Time to Die.”

The big-screen bow for the 25th installment in the venerable film franchise was long-delayed due to the COVID-19 pandemic but highly anticipated as it marks the final outing as 007 for Daniel Craig, who has played the fictional MI6 agent through five films over the past 15 years.

Craig brought new grit, depth and soul to the shaken-not-stirred spy, and his tenure as the suave secret agent heralded a new era for the franchise. His 007 movies follow a distinctive character arc, feature formidable women and not just “Bond girls,” and show a Bond that is feeling his age, not to mention the physical wear and the emotional tear of his “licensed to kill” career.

Since the end credits promise that “James Bond will return,” Craig’s last Bond movie also should leave fans eager to see what — or more accurately, who — will happen next in the superspy saga.

Helmed by Cary Joji Fukunaga (2011’s “Jane Eyre,” HBO’s “True Detective”), the first American director to take on the iconic spy series, “No Time to Die” has plenty of time to kill, running a bladder-busting 2 hours and 43 minutes. But it’s a credit to Fukunaga — who replaced Brit Danny Boyle after he departed the project over creative differences — that “No Time to Die” seems shorter than its almost three-hour runtime. The Emmy-winning storyteller keeps the movie sprinting along almost fast enough to distract from the overly complicated and occasionally shaky plot.

Despite its flaws, “No Time to Die” proves worth the wait, mostly by staying true to or improving on what fans have come to expect from the James Bond movies. The movie zips from scenic Southern Italy to Bond’s low-key Jamaica hideaway to the mist-shrouded forests of Norway, with cinematographer Linus Sandgren lovingly showcasing each locale.

“No Time to Die” also features a flashback, an explosion, at least two car chases, multiple shootouts and a suspected betrayal, all before the opening credits roll. Writers Fukunaga, Neal Purvis, Robert Wade and Phoebe Waller-Bridge keep that breathtaking pace going for most of the movie, giving fans plenty of opportunities to see Craig’s Bond and his cohorts in action one last time.

Despite the changes in filmmaking styles, some traditions smartly remain unchanged in the Bond franchise, including an elaborate opening credits sequence accompanied by a title song warbled by a top pop chanteuse. This time, seven-time Grammy winner Billie Eilish croons the seductively foreboding “No Time to Die,” while Daniel Kleinman has created a slickly portentous title sequence crammed with hourglasses, clocks and Bond’s sinking Aston Martin.

Posing for the last time in that iconic gun barrel shot, Craig might not wear a tuxedo with quite the same second-skin ease as Sean Connery or Pierce Brosnan, but his looks can practically kill when he dons a Tom Ford suit.

Bond starts out retired in “No Time to Die,” and Emmy-winning costume designer Suttirat Anne Larlarb excels at dressing him up in high-end leisure wear, including a tan corduroy Massimo Alba suit that matches his sleek Aston Martin D85.

Naturally, Bond’s Aston Martin is more than just a luxury ride; it comes decked out in all sorts of handy spy gear for avoiding, ditching or taking out pursuers.

Ben Whishaw is back as Q, MI6’s resident gadget guru, and he equips Bond with a stealthy gravity plane and a nifty watch that makes an Apple Watch look like a plastic prize out of a crane game. But the most whiz-bang of the film’s high-tech toys are actually deployed by some of the bad guys, who use a snazzy set of magnets to make a plunge down a high-rise elevator shaft as safe as a Sunday stroll through the park.

Whishaw’s Q isn’t the only supporting player from the Craig Bond era who returns in “No Time to Die.” Ralph Fiennes reprises his role as MI6 chief M — a lovely portrait of Dame Judy Dench also pays fitting homage to her time as M in Craig’s Bond saga — and Jeffrey Wright makes a welcome return as Bond’s CIA buddy Felix Leiter.

Christoph Waltz brings his uniquely erudite brand of menace back as Bond’s nemesis Blofeld, the leader of the shadowy SPECTRE organization, and Rami Malek makes the most of his arguably undersized role as the new Bond villain Safin, a soft-spoken and poisonous megalomaniac.

If ever there was a cinematic trope of this franchise that needed to die, it’s the concept of the Bond girl, the one-dimensional eye-candy characters with their dirty double-entendre names and little raison d’être except to be seduced by 007.

More recent Bond movies have tried to steer away from the misogynistic concept, but “No Time to Die” drags it out and hopefully kills it off for good, with a quartet of diverse powerhouse women who are more than a match for Bond in different ways. (Although the age difference between Bond and his love interest is still a bit wide, at least all four actresses are in their 30s or 40s, setting them firmly outside “girl” status.)

Léa Seydoux returns as Bond’s love interest, Dr. Madeleine Swann, a French psychologist whose own ties to the secretive world of global espionage threaten her romance with the retired spy.

Naomie Harris is overqualified for the small part of M’s assistant Eve Moneypenny, but she’s still a witty and clever mover-and-shaker.

As Bond’s successor to the vaunted “license to kill” status, “Captain Marvel” co-star Lashana Lynch makes franchise history as the first Black 007, and she brings so much charisma and confidence as her character, Nomi, that fans will want to follow her on her next mission.

But it’s Craig’s “Knives Out” co-star Ana de Armas who steals the show as Paloma, a promising rookie CIA agent who teams with Bond on an undercover outing to a formal party and impresses the veteran spy by kicking butt, taking names and chugging martinis even in high heels and a long gown with a plunging neckline. Sign me up for the spin-off series, as this character seems more than ready to give any newcomer as Bond a run for the superspy money.