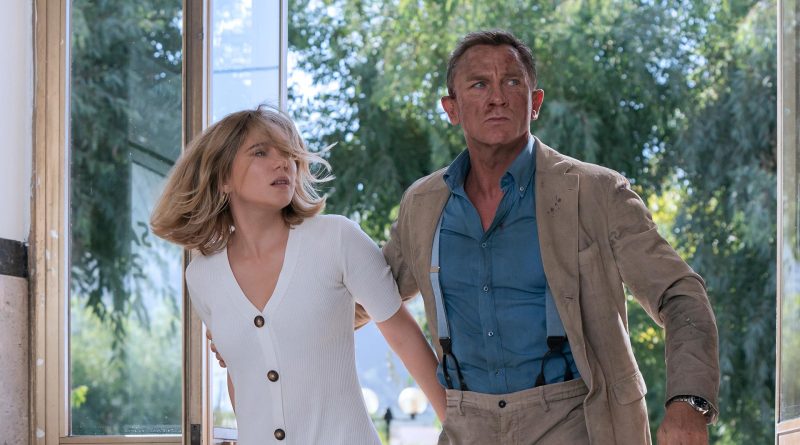 No Time To Die is more of an event than a movie, but that’s the territory with James Bond.

Fans waited 18 months to see the film and everyone knows it’s Daniel Craig’s last time at bat as the famed British spy, so the film came freighted with massive expectations.

Writing about women and film is what we do around here, so it’s important to note that Phoebe Waller-Bridge (Fleabag) reshaped the story with the blessing of all concerned, including Daniel Craig, who described her as a “fucking great writer” to the Financial Times.

This is only the second time in all the Bond films that a woman was involved in the writing. In the ‘60s, Johanna Harwood worked on Dr. No and From Russia With Love.

For No Time To Die, Waller-Bridge helped create the first female 00 agent, played by Lashana Lynch with a dry wit and a cool efficiency equal to Bond’s.

And you can sense Waller-Bridge’s touch throughout. There’s an action bit set in Cuba, for example, that has Bond working side by side with a novice spy played by Ana de Armas; there’s a sort of Nick and Nora Charles energy to the sequence and it’s all light years removed from the usual Bond interaction with secondary female characters.

With Daniel Craig, it’s more as if Waller-Bridge knew what she was dealing with and just got out of the way, allowing the actor to make Bond more fully three dimensional.

Bond is world-weary and wary in No Time To Die, retired from active service and living on an island paradise. He is quite alone.

A visit from his old friend Felix Leiter (Jeffrey Wright) pulls him back into the game to find a missing scientist and go up against a villain (Rami Malek) who has developed a highly personal and effective way to kill anyone he chooses.

The goal is world domination — plus ca change — but the road to this battle of good vs. evil is a marvel of old and new from filmmaker Fukunaga. And he manages to clean up much of the messy storytelling that was Spectre into the bargain.

The high-tech 21st century espionage tale comes wrapped in visual nods to past Bond movies; baby boomers in the audience will be awash in nostalgia.

Of course, No Time To Die carries almost 60 years of history along with it. Dr. No was released in 1962, so the 25 Bond films span the movie-going life of your average baby boomer, from adolescence to now.

It’s bittersweet to see Daniel Craig come to the end of his run as James Bond, but there’s no question that he will take his place in the pantheon as one of the best.

He pulled Bond, kicking and screaming, into the 21st century and seems to have done it on his own terms.

Craig was the first Bond anointed in the brave new world created by social media. That was 15 years ago, and the feeding frenzy that attended his ascension to the role of the iconic spy was like an assault.

A BLONDE CANNOT BE BOND!!! is the sort of outraged media essay he was subjected to, despite the fact that Craig was already a respected actor in theatre and film.

Much of the trolling died with the spectacular success of Casino Royale. That left the actor to control the Bond juggernaut thereafter, a simple matter of withstanding a level of fame that comes with a crushing tsunami of intrusive global attention.

Perhaps Mr. Craig won’t be sorry to step away from Mr. Bond and get his life back, now that he has all the time in the world.