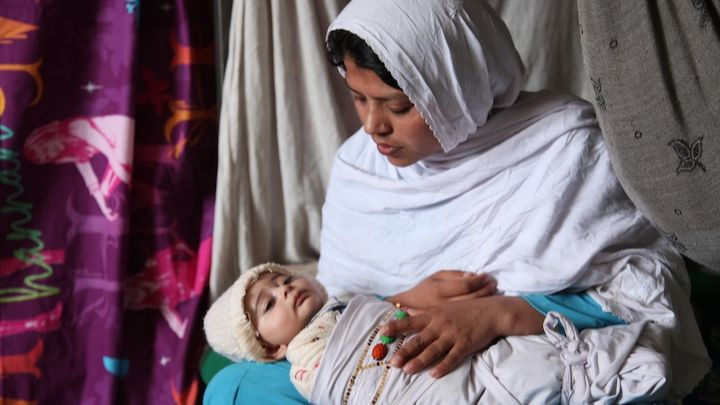 The oppressed legal status of women in Afghanistan is well known and even more distressing with the recent Taliban takeover. Providing important insights, in particularizing the experiences of two Afghan women, directors Clementine Malpas and Sam French add alarming details to that more general understanding of exactly what this lived legal, cultural subjugation means and the ways even the European Union supports that inequitable system.

As the introductory, on-screen titles state, “Since 2001, the European Union has spent billions of dollars supporting judicial reform to protect women’s rights in Afghanistan. These efforts did not stop Afghanistan’s courts from imprisoning thousands of women for ‘moral crimes,’ such as having sex outside of marriage.” Following this alarming statistic, Gulnaz and Farida reveal exactly what that means for these two women, followed over ten years through their clashes with traditional values and practices.

We first meet Farida in Parwan Prison for fleeing her husband Ismail who beat her with an iron rod, caused four miscarriages, and regularly paid for sex with boys in their home. She attempted suicide and says, “Living with my husband was like dying every day.” But caught with the man with whom she fled after thirteen years of this misery, Farida receives a sentence under Islamic law of six years in prison. The second woman, sentenced to twelve years in the Badam Bagh Prison in Kabul, is Gulnaz, raped by her uncle who received a two year prison sentence. Gulnaz cares for the baby girl she delivered as a result of the rape. The prosecutor claims it was clear Gulnaz wanted to have sex since she could have yelled (though her hands and feet were bound) and she didn’t report the crime for four months. In candid, daring descriptions, both Gulnaz and Farida explain the traditional values of Islamic tribal law that supersede and overrule the judicial system. The woman, even if she is the victim, is the one blamed, as Farida’s lawyer observes.

What happens next is the most disturbing development. The EU shuts down the documentary’s production, asserting the women would be put in danger, arguing with them to refuse any further cooperation. I won’t detail the equally surprising events that follow, though each bares the entrenched resistance to progressive change. These revelations come through direct access to Farida’s husband and Gulnaz’s rapist, a heroic woman lawyer, and additional details regarding divorce law. Most heart breaking, Farida says there’s no freedom in prison, that she felt like a bird in a cage, but once out “I feel that with every breath I fly,” hence the film’s title offering the most ironic statement.

The access to these courageous women and their advocates takes us into rare, usually inaccessible territory. Added to the EU actions, this drives home, in unprecedented ways, the multiple hurdles to personal and political reform. Supported by allegiance to the Islamic tradition, the inhumane treatment of women is now, thanks to With This Breath I Fly, on full display through these two women’s tragic lives. In addition, the cinematography, the nicely paced editing, and the infrequent but suitable music—all contribute to its powerful impact. Kudos to Malpas and French for working to change such a repressive environment. With This Breath I Fly is in English and in Persian with English subtitles.