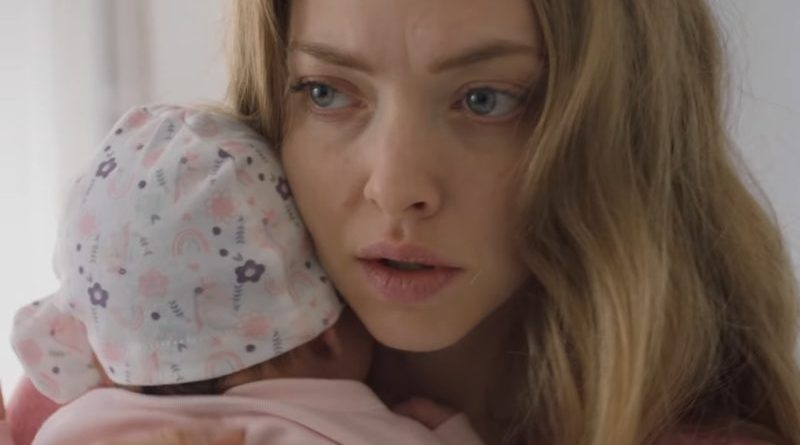 Depression doesn’t play favorites. Neither does anxiety. A loving family, a creative career, and financial stability are no defense against the darkness that creeps into one’s mind, as the drama A Mouthful of Air demonstrates through one mother’s anguish.

Making her feature directing debut, Amy Koppelman adapted her fictional 2003 novel of the same name, based on her own experience with clinical depression. Compassionate yet wrenching, the film A Mouthful of Air depicts how sabotaging this illness can be, and how helpless a person and their loved ones can feel in the face of this.

The film has such emotional truth that it includes a warning at the beginning to people who have experienced depression and anxiety. I have, and I’ve also lost a friend to this. This film gutted me.

Julie (Amanda Seyfried) is a successful children’s author and illustrator living in a plush New York City apartment with her husband, Ethan (Finn Wittrock), and one-year-old son, Teddy. As she describes an upcoming presentation for children featuring her books’ rainbow-loving character, Pinky Tinkerbink, Ethan gazes at her adoringly – and she fidgets, looking away. If he really knew how lousy she was, she shares later, he wouldn’t love her so much.

Wracked with insecurities, Julie believes that she’s bound to gravely disappoint him or their son. He and Teddy, she reasons, would be better off without her. So while the boy watches Ernie on Sesame Street sing of wanting to live on the moon, she tries to take her own life.

Afterward, A Mouthful of Air jumps around a bit in time, although the bulk of the story is set in the 1990s, when depression among women and postpartum depression in particular weren’t discussed as freely (or portrayed as sensitively, as in 2018’s Tully). We visit fragments of Julie’s childhood and her father’s own emotional issues, the fallout of her suicide attempt, and some future scenes that only coalesce toward the end.

Julie meets with a gentle doctor (Paul Giamatti, Billions), who places her on medication. Her mother (Amy Irving, Unsane) readily babysits, yet hovers outside the bathroom while Julie is in the shower. Her sister-in-law (Jennifer Carpenter, Limitless) uncorks anger, accusing Julie of not thinking of anyone but herself. Ethan suggests moving out of the city, to a house with a yard. “What if you don’t love me there?” Julie asks. “Do you think we’ll be happy there?”

Julie says the medication helps her see colors in what she calls “a black and white world.” But once she learns she’s pregnant again, this time with a girl, she refuses to take it, citing a concern for the baby’s health. The real reason, the film implies, are those thoughts she can’t escape: that if she needs such help, or delays having another child, she’s every inch the rotten mother that her inadequacy tells her she must be.

Wittrock, who recently portrayed a vampiric husband on American Horror Story, is earnest and sympathetic here as a man who genuinely loves his wife and wants to help her. He becomes frustrated by how good she is at pretending she’s OK, then upset and angry because he can’t really be angry with her but ultimately doesn’t want to be.

And Julie is great at pretending. A Mouthful of Air places us inside her mind partly through her illustrations and animation of her stories. She decorates their home with murals, stencils, paper dolls, and wispy cotton clouds, like a book come to life, but it’s all to keep the darkness at bay. In her next story, she tells Ethan, Pinky saves the stars from a monster who eats them. He smiles at her whimsy, not realizing that the monster is what’s eating Julie’s happiness a little at a time.

Mostly, we sense Julie’s pain through Seyfried’s subtle, fragile performance. An Oscar nominee for 2020’s Mank, Seyfried shows the mask that Julie wears and how it slips when she thinks no one’s watching. Even bathing her baby boy or kissing his cheeks, her joy is fleeting. Her eyes wander, drawn to those nagging negative thoughts that, even if she dares to say them, she excuses as stress or hormones, nothing she can’t handle.

Such as how she doesn’t remember how to laugh, and wonders if she can teach her daughter to laugh.

Or what price her children will pay having her for a mom.

Ethan, her own mom, and even kind souls like her neighbors tell Julie she’ll be OK. They hug her and tell her how much she matters, that they love her – and we can see her wanting to believe that. She just doesn’t.

A Mouthful of Air delivers a heartbreaking story that, one hopes, might show someone else she’s not alone.