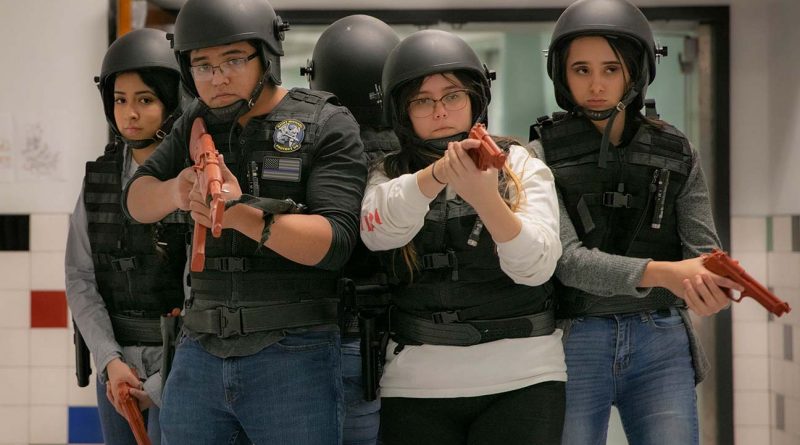 The documentary At the Ready is an easy sell for those who find something uniquely fascinating about the state of Texas, and in particular its border towns. The fact that there are high schools in Texas that offer law enforcement courses and criminal justice clubs in which students compete in mock raids, hostage negotiations, active-shooter situations, and other law enforcement scenarios shouldn’t come as a surprise; it’s Texas. What is surprising, is that the documentary isn’t about an all-White high school in a red swath of the State; it’s about a club at predominantly Hispanic (nearly all the students are cued as Mexican American) Horizon High School in El Paso.

Director Maisie Crow’s documentary is simultaneously riveting and disconcerting, inspiring and heartbreaking, because the footage was taken during the Trump Administration. She focuses on three students, each of whom is lured mostly by the promise that the course/club will prepare them for a career in law enforcement with a solid starting salary of $50,000 straight out of high school. In one touching scene, recent graduate Cristina’s father marvels in Spanish that this could be her first salary when he just started making that much two years earlier. He’s emotional at the thought that Christina will don a uniform and have a stable job. He earnestly defends the Latinos who work for Border Patrol, claiming they’re not racists and that they’re trying to communicate with and help undocumented immigrants.

Crow doesn’t judge her subjects or try to insert opposing points of view. She allows the stories of three students with different motivations and interests to speak for themselves against the backdrop of video and conversations about Trump’s anti-immigrant rhetoric and policies. The most interesting student is Kassy (in an end-scene it’s revealed that in college he came out as trans and is named Mason), who is appointed the year’s Commanding Officer and is outspokenly liberal (and out) in the filmmaker interviews. With a truck driver dad who is barely home they consider the club a family – just not a particularly open-minded one.

The third student the documentary follows is Cesar, who has a complicated relationship with law enforcement and immigration laws, considering his father was deported back to Mexico for a drug infraction. As he gets back in touch with his father, Cesar, like Mason, must come to terms with how their personal beliefs and circumstances conflict with the Criminal Justice Club’s mission.

The adults in the movie are mostly retired or volunteer law enforcement, including the no-nonsense and kind Ms. Weaver and the older, more overtly conservative Guerro. One of the best scenes in the documentary is late in the film when a third adult sponsor admits he soft-pedals his experiences in order to make the job more palatable to teens; he even confesses that the job cost him his job. Beto O’Rourke’s gubernatorial campaign is also woven into the story, with Mason in particular becoming involved in supporting his candidacy.

While not necessarily a feel-good documentary, like Boys State, the film deftly chronicles how the featured students grow to have evolving opinions about law enforcement, immigration, and the treatment of Latinx and border town communities. At the Ready is a thought-provoking and evocative film from a talented documentarian.