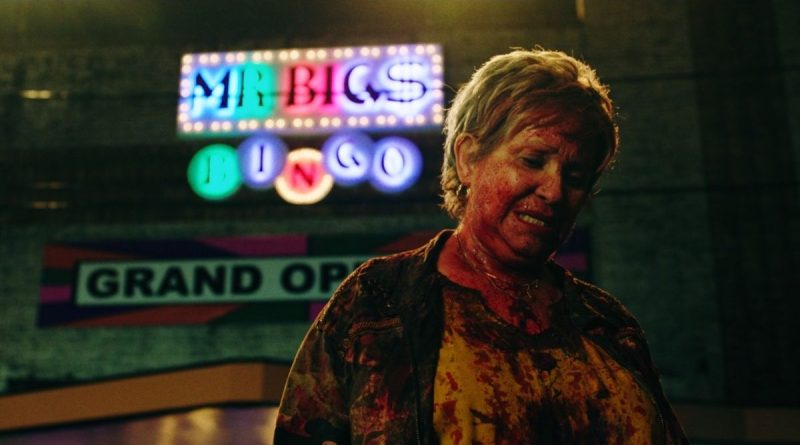 For a lot of people, growing older and having your life revolve around bingo might sound like a living hell. But imagine for one moment not being an ageist, classist asshole who thinks like this; for many – such as the feisty, grey haired, working class and largely non-white ensemble cast of Gigi Saul Guerrero’s sophomore feature – bingo is a bond. It tethers a network of friends and neighbors together in a fun, regular ritual at the local community hall which forms the foundations of their day-to-day lives. They share their highs and lows, accomplishments and losses, struggles and triumphs. In Bingo Hell, if someone is going through a tough time, the others do what they can to help. They cut each other’s hair. They fix each other’s cars. They listen to each other’s family dramas, never afraid to speak up and call someone out if they are the one being the jerk.

This is Oak Springs, a proud community that is slowly but visibly being gentrified as bespoke coffee shops and hip young things start arriving in their droves. At the heart of our community of bingo enthusiasts we find Lupita (Adriana Barraza) who, with her best friend Dolores (L. Scott Caldwell), kept Oak Springs largely gang-free in their younger years, literally fighting on the streets to protect their community. Older now but not necessarily wiser, while Dolores grows weary due to an unhappy home situation with her daughter-in-law and grandson, Lupita has not lost her spirit. When their local, low-key regular bingo night is taken over by a glossy, neon-drenched corporate affair called Mr Big’s Bingo, Lupita intuits almost instantly that the big prizes and Mr Big’s (Richard Brake) cheesy public persona cannot possibly be as good as they appear. And she’s right; although no one else believes her, she embarks on a mission against Mr Big and reveals a supernatural secret that no one – not even she – is fully prepared for.

The second of Gigi Saul Guerrero’s feature films for Blumhouse, Bingo Hell is part of the Blumhouse/Amazon Prime feature horror anthology series Welcome to the Blumhouse, following on from her critically celebrated Culture Shock in the Hulu/Blumhouse feature anthology series, Into the Dark. At first glance, Culture Shock and Bingo Hell couldn’t be more different. The former is a powerful, dark and at times surreal exploration of the aspirations and abuse of Mexican immigrants trying to cross the border to the United States, while Bingo Hell focuses on an irreverent horror comedy full of splattery fun as women who would normally be typecast as two-dimensional, kindly grandmothers who melt into the background are here moved front and center, becoming our gun tottin’, demon slaying heroes.

Certainly the brilliant Culture Shock is the more overtly political of the two, and the light-hearted, rainbow-colored splatstick tone of Bingo Hell may be enough to distract half-focused critics from its equally aggressive political dimension. Although tonally more upbeat, both Culture Shock and Bingo Hell share much of the same thematic fascinations; they are about the people that film and television otherwise almost always exclude in their stories about immigrants, older women, the poor, the vulnerable. While Bingo Hell refuses to dumb down its core ideological message, it still remains grey-haired driven, gory fun. What makes Gigi Saul Guerrero’s engagement with this material so significant – yes, even when it’s dripping with green slime and exploding viscera – is how absolutely defined it is by a sense of respect and love for her characters and their world. Bingo Hell is not poverty porn, which in the hands of most filmmakers, it would perhaps inevitably end up being; patronizing, pearl clutching and preachy.

But Gigi Saul Guerrero fleshes out her characters – Lupita and Dolores especially – with a genuine love that grants them the right to flaws and strengths, and in doing so presents a deceptively sharp portrait of what it is like to be vulnerable to capitalist snake oil merchants. Mr Big sees the pain of poverty as a business opportunity (and something more devilish besides), but he is blind to the sense of community that is ultimately worth more to the long-time residents of Oak Springs than a suitcase full of cash. Gigi Saul Guerrero makes smart, emotionally intelligent horror films that are simultaneously a lot of fun; in Bingo Hell, she lets you have your popcorn thrills without sacrificing her desire to really say something. Blumhouse have picked a winner here, and they better know it.

Below are exclusive photos from the Bingo Hell set. Many thanks to Gigi Saul Guerrero for permitting the Alliance of Women Film journalists to share this look behind her camera!