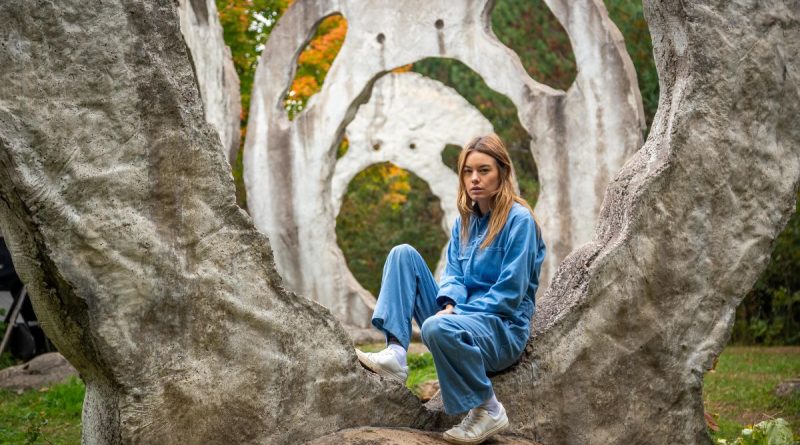 Aurora was only a child when she saw her UFO obsessed mother disappear, assumedly abducted by aliens on a camping trip. In her dippy hippy tie-dyed hoodie and hugging her little comfort bunny plushie, the suddenly abandoned child grows up cared for by her beloved aunt Caroline (Vickie Papavs). Now known as Ro (Camille Rowe), the adult Aurora struggles to shake the childhood trauma, which she expresses through a continuing fascination with extra-terrestrial life.

Drawn by a vision of the enigmatic cult leader Elyse (Antonia Zegers) into a bookshop, an encounter with shop assistant Natalie (Emmanuelle Chriqui) brings Elyse and Ro face to face through Elyse’s book The Cosmic Dawn, upon which her small but intense cult is based. Joining them in their isolated headquarters, Ro meets a number of others whose devotion to Elyse seems – superficially at least – unquestionable. But, darting back and forth between past and present, it is revealed that the intergalactic utopia Elyse has promised her followers may not be the guaranteed, cut-and-dried journey towards eternal transcendental bliss that she appears to have offered.

With its recent world premiere at the Nightstream virtual film festival, writer/director Jefferson Moneo’s Cosmic Dawn is far from the typical terrain of UFO conspiracy films as can be imagined – this is no X-Files fanfic and is all the stronger for it. This is largely informed by Moneo’s own experience with an alien encounter as a child, which – for sceptics and believers alike – undeniably manifests in the film in a sincerity and a sense of intimacy that films and television shows dealing with this subject so often miss.

Perhaps appropriately in keeping with the questions of belief and doubt that dominate the film, Cosmic Dawn keeps a lot of doors open, and yet structurally doesn’t feel incomplete; quite a feat in a technical sense alone, and in terms of the sheer experience of watching the film, it’s straight-up jaw-dropping.

Cosmic Dawn in many ways joins a stream of recent films about women and cults, many of which like Ari Aster’s Midsommar are better known than some of the more hidden treasures, including Małgorzata Szumowska’s The Other Lamb and Jorunn Myklebust Syversen’s Disco. Again focused on the psychological aspects of what it is that drives people to join cults and what they benefit – or don’t – from the experience again lies at the heart of Jefferson Moneo’s film, but, commendably, it is distinctly hands off when it comes to making any final judgement, and impressively allows Ro in particular a degree of autonomy when it comes to what she ultimately believes and what she doesn’t. Held together by a number of strong performances – Antonia Zegers as the cult leader especially – despite perhaps pushing it a little on the celestial lava lamp aesthetics front – Cosmic Dawn is a rewarding trip worth taking.