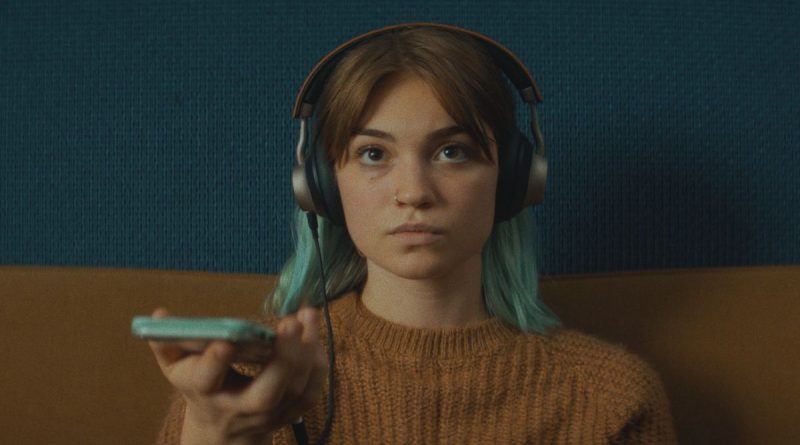 Sometimes a film comes seemingly from out of nowhere and leaves your usually articulate critical voice struggling for words; Ori Segev and Noah Dixon’s co-directed indie music scene dark drama Poser is that, and so much more besides. Set in Columbus, Ohio, Lennon (Sylvie Mix) is a local scene outsider, who takes a fake-it-till-you-make-it approach to being a scene insider. Doing a preliminary Google search on how to start your own podcast, Lennon – who was already a sound geek with a passion that straddles found sound and the more ethically questionable terrain of eavesdropping – Lennon uses her podcast as a way in, a means to connect with local musicians.

The podcast is hardly a success, but that is not the point; it is, ultimately, it’s a means to an end, a way of getting this outsider access to the inside. Which, as she develops a friendship with a local musician with whom she is starstruck, Bobbi Kitten (who plays herself in the film), seems to be Lennon’s secret to success. Speaking on her podcast with an authoritative voice on the scene, it’s internal mechanics, and subcultural structures, through her relationship with Kitten especially, Lennon seems to be making it.

Until, that is, it all falls apart. Lonely and isolated and desperate for peer approval, Lennon is a subcultural tourist who has no boundaries when it comes to gaining that connection which she so desperately craves, building her entire persona around it, no matter how inauthentically. While a deeply troubled protagonist by anyone’s standards, through a very strong performance by newcomer Mix, Lennon straddles a difficult line between allowing us to connect with her story, without necessarily feeling empathy as such for her. She’s a complex, difficult character which results in a complex, difficult relationship from an audience’s perspective, but in their collaboration, Segev, Sixon and Mix tackle this head on, and succeed.

As a world building exercise, Poser is deeply ensconced in the Columbus indie music scene, which is brought to life here in a variety of ways, including casting significant scene luminaries such as Bobbi Kitten. But this is no navel-gazing, regional subcultural circle jerk; sometimes dark, frequently self-depreciative and often dryly funny, there is a sad, bleak heart to Poser that is where its ultimate impact is contained.

While Poser is very much a film about young people, as a verified old person I never felt like I was neither excluded nor pandered to in my experience of watching this film. While effectively about the insecure posturing of youth, that posturing isn’t of course age specific. Awkward conversations aren’t age specific. Being pretentious in the hopes of camouflaging self-doubt isn’t age specific. Poser’s focus is too precise to be anything as pompous as “universal”, but at the same time, it speaks well beyond the Columbus indie music scene and has something much grander to say about the lived experiences of those of us with flaws, those of us who stumble, and those of us who perhaps, when push comes to shove, have to admit that sometimes, we’ve tried too hard to be liked. Poser is what great indie film is all about.