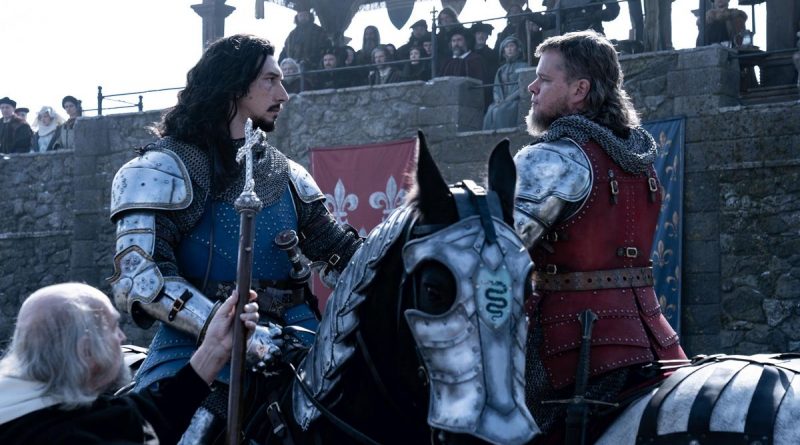 As an American woman in the 21st century, perhaps I take my rights and privileges too much for granted. Certainly, this medieval drama puts a clear perspective on the indisputable fact that – for most of recorded history – women were routinely subjugated, regarded as chattel.

In 14th century France, a cleric stated: “Rape is not a crime against a woman. It’s a property matter.”

The rape in this sprawling story is described from three distinct perspectives with a slashing duel-to-the-death looming as the inevitable conclusion.

In the first chapter, a proud, if petty knight, Sir Jean de Carrouges (Matt Damon), saves the life of Jacques Le Gris (Adam Driver) at the Battle of Limoges which does little to redeem him in the view of his liege, supercilious Count Pierre d’Alencon (Ben Affleck), particularly after Jean marries Marguerite (Jodie Comer), the beautiful daughter of a one-time traitor.

The second version is told from the perspective of the dashing squire, Jacques Le Gris, an educated yet ruthless libertine who feels he’s entitled to possess any woman he desires, particularly flirtatious Marguerite.

Finally, the third chapter – The Truth – told from Marguerite’s #MeToo viewpoint – reveals how her sullen, burly husband bickered with her father over the land in her dowry and how cruelly she was treated by her acerbic mother-in-law because, for a long time, she was unable to bear an heir.

It’s all about the roots of misogyny and the dynamics of power, as Marguerite insists,” I cannot be silent. I want him to answer for what he has done.”

On the Granger Gauge of 1 to 10, The Last Duel is a bleak, blood-soaked 6, chronicling France’s final officially sanctioned trial-by-combat in 1386.