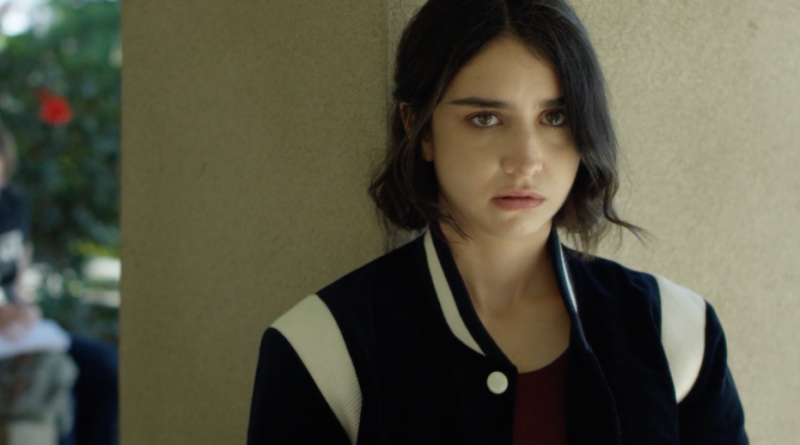 Failing her final college course, meaning she doesn’t graduate, Janey retreats to her family’s lakefront house. The interactions with friends and family develop the environment she inhabits, including alcohol and weed, skinny dipping, and just talking. Over the next weeks, she wanders self-consciously through diverse experiences, some more significant than others. For example, she helps her friend Amber face the fact that her son is deaf. They use sign language with each other, an unusual and refreshing choice. In addition, Jane’s sister Lacey offers support (though not without some sibling conflict), along with their parents.

Throughout Disfluency, writer/director Anna Baumgarten interrupts events with interjected flashbacks, thereby slowly revealing the tragic event that led to Jane’s leaving college, her rape. It’s not difficult to see where the plot is heading, though that makes it no less important, a valuable warning, especially to those of Jane’s age group. When Jane files a police report, a significant reminder that this is a criminal act, the focus shifts to the reprehensible, and all too common, suggestion that Jane’s intoxicated state matters. Through the course of the film, her trauma emerges as profoundly intelligible and heartbreaking.

With serviceable technical choices, the story unfolds with clear purpose. As Jane, Libe Barer exhibits a relaxed screen presence, with solid supporting performances. Adding an essential critique, Baumgarten’s well-chosen title suggests that just as “umms” and “I’m sorry” and “you know” are disfluencies that interrupt conversation, our dysfunctional, misogynistic society has come to see rape as a mere unpleasant interrupter, part of our cultural landscape. Though it occasionally feels like a familiar ‘message’ film, Disfluency respects and acknowledges the nightmare that ensues after such a cruel act. Frankly, it’s too familiar a despicable event, and Jane’s story may well help others through such harrowing experiences.