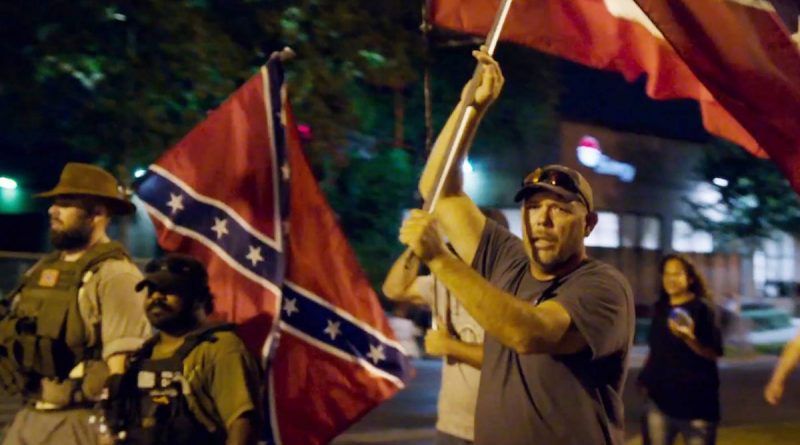 How do Americans tell the history of the time our country suffered an insurrection? How do we teach about the Civil War, learn about it, perpetuate “The Lost Cause”? How do we translate the period of Reconstruction to the continuing era of White Supremacy? Filmmaker Rachel Boynton asked those questions, over and over, in class rooms and council rooms and living rooms.

She began filming in the last year of the Obama Administration and continued through the Trump Administration. She asked Southerners and Northerners, sophomores and seniors, blacks and whites, old and young. Boynton stays very much a part of the process, investigating, insisting, listening. She forces interviewees to answer her pointed questions.

She traipses from one end of the country to the other, from New Orleans where a statue of Jefferson Davis is being felled to Lincoln University in Pennsylvania to a lecture by Kellie Carter Jackson, author of Force and Freedom. In Chattanooga, she records a group discussion that includes former principal of Kirkwood High School, Franklin McCallie. She goes to Washington, D.C., to the African-American Civil War Museum and to Clinton, Miss., where the Clinton Riot Marker from 1875 marks where white Democrats beat up black Republicans.

She shows clips of films from The Birth of a Nation (1915) to The Littlest Rebel (1935) and Gone with the Wind (1939). Included among her interviews are artist Kehinde Wiley; recent recipient of a MacArthur “genius” Grant, Ibram X. Kendi, author of How To Be an AntiRacist; school teachers Cate Arnold and Antwayn Patrick, one Northern white and one Southern Black; two old, white Sons of Confederate Veterans; William Shirley, a former state Congressman from Miss. who supported keeping the old state flag with the Confederate flag in its corner. Plus high school students being as articulate as they know how.

Civil War, Boynton’s third film examining America and Americans, is excellent and provocative. With Brad Pitt and Henry Louis Gates among the producers, Civil War provokes thoughts about war, Reconstruction, slavery, myths and pedagogy. But, mostly, sadly, about how little has changed in 120 years.