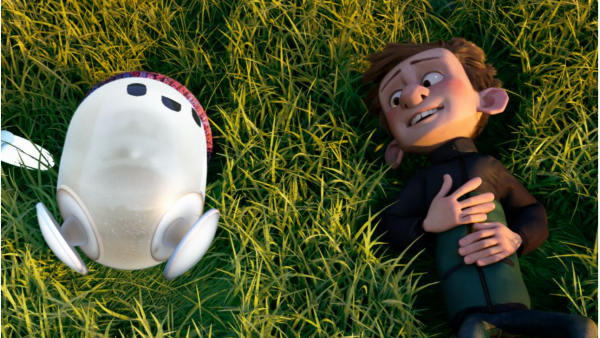 How long can I hold off from getting my 5th grader a smartphone? On the first day of school this year, I saw my son’s classmates huddled together, exchanging phone numbers. My kid wasn’t part of that group. The moment startled me, as I was witnessing in real time how having that device could help build friendships – they’d text funny comments and memes to each other, make plans to get together, or ask questions about homework. But data reveals that smartphones and the social media apps that inevitably come with it play significant roles in the rise in anxiety, depression, bullying, and suicide in kids as young as 8. How do families strike the balance?

Ron’s Gone Wrong creatively illuminates how “connected” devices are contributing to a lack of human connection and the unprecedented challenge kids face as they grow up in the social media age. This empathetic animated family film, which Disney absorbed in the 20th Century Fox acquisition, looks at the complications of establishing friendships today, especially if you’re a socially challenged introvert.

Barney (voiced by Jack Dylan Grazer) is a quiet seventh grader whose mother passed away when he was a toddler. His distracted single father (Ed Helms) and overbearing Bulgarian grandmother (Olivia Colman) aren’t tuned into the modern parenting world and don’t understand why Barney wants a B*Bot, an expensive tech toy that every other kid in his middle school already owns. The B*Bot is a robot whose artificial intelligence is programmed to make it a rolling companion. Marketed as “your best friend out of the box,” B*Bots are intended to help kids make friends by digitally connecting them with others who have similar interests. If you’re not in the B*Bot network, though, you’re out.

When Barney finally gets one as a birthday present, his B*Bot, R0NB1NT5CAT5CO, is damaged, its programming incomplete. “Ron” (Zach Galifianakis) creates more problems than it solves, but Barney, desperate to finally have this long-awaited device, is unwilling to let it go and hopes he can train his rogue robot into being his friend. While Ron isn’t connected to “the Bubble,” Barney finds a deeper connection with Ron.

There’s plenty of relatable material in this movie for both kids and adults, especially in a post-pandemic world where so many people have experienced isolation and are only now reconnecting with friends they haven’t seen in nearly two years. During that time, plenty of children found kinship with disembodied voices on video game networks, getting to know kids (hopefully!) in far-off locations whom they may never meet in person. Others watched endless streams of content on YouTube, Twitch, and TikTok that offered little emotional fulfillment, perhaps contributing to an even greater feeling of estrangement. We’re all lost in our screens, manipulated by algorithms that have used our data to keep feeding us content to keep us sucked in.

The timing of Ron’s Gone Wrong‘s release is fortuitous: In the last month, it’s come to light that Instagram has been well aware of the harmful impact it has on teens, while new research from Common Sense Media reveals that streaming services continue to infringe on our privacy and harvest our kids’ data. Ron’s Gone Wrong shows why that matters and how even the savviest “kidfluencers” can get burned. And while that might make it sound like the film is heavy, it’s not. It’s meaningful.

In the most delightful and entertaining package, Ron is a reminder that kids need to relish their time with each other and be the master of technology, rather than be mastered by it. But that warning bell has been ringing loudly for a long time; it’s not news that smart devices and apps are causing some users lasting and sometimes devastating social harm. Viewers may nod along to Ron, but will they alter their behavior?

As for me, Ron has helped me to see that I have to more carefully assess which is more damaging: the isolation that comes with being left out or the vulnerability that can come with being “in.”