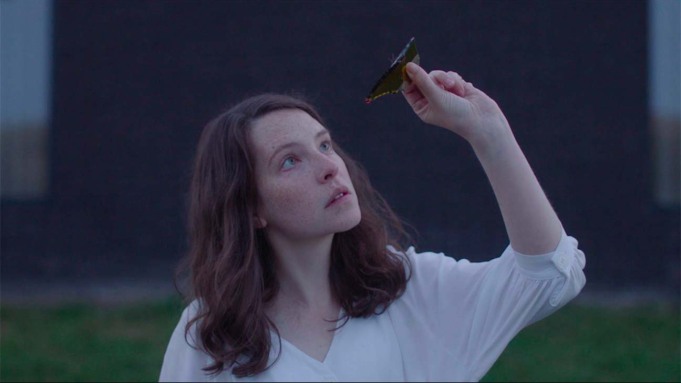 From Tobe Hooper’s The Texas Chain Saw Massacre to Karyn Kusama’s The Invitation, the dinner table as a space for transgressive social and/or familial communion has long proven rich terrain for the horror genre to mine. There’s a sense of physical intimacy as individual characters are placed in close proximity to one another, and the central act – eating – is a primarily bodily one which, even in the most intellectual and discourse-heavy variations of this trope, still places the corporeal center stage.

Enter Lee Haven Jones’s Welsh genre-classic-in-the-making, The Feast. While, as its name alone indicates, it sits comfortably amongst other dining-centric horror movies, The Feast straddles an impressive number of sub-genres, both in horror and beyond: class drama, eco-horror, family melodrama…to list them all would, however, reveal too much about the surprises Jones’s film holds so confidently up its sleeves.

The Welsh-language film (a language we certainly don’t hear enough of in cinema, especially genre cinema) is set in the isolated yet distinctly upscale home of Glenda (Nia Roberts) and Gwyn (Julian Lewis Jones). Through the latter’s job as a politician, the family spend much of their time in London, rendering the rural property an idyllic escape from the hustle and bustle. Built on the land where Glenda’s mother once had a farmhouse, the environment where Glenda herself grew up is vastly different, we learn, from that of the self-obsessed bourgeoise amongst whom she now finds herself, flourishing in her upward mobility. Fussing around preparations for an important dinner party, she has hired local girl Cadi (Annes Elwy) to assist her. Barely verbal and aware of her place in a class sense, Cadi at first appears to be obedient and does what she is told as, around her, the dysfunction of the wealthy family becomes increasingly apparent – not just of Glenda and Gwyn, but their two adult sons, Guto (Steffan Cennydd) and Gweirydd (Sion Alun Davis). When the big night arrives along with the two guests – mining consultant Euros (Rhodri Meilir) and the family’s long-time neighbour Mair (Lisa Palfrey) – the reasons for the high-stakes dinner are revealed. Simultaneously, however, Cadi’s increasingly unusual behaviour also is driven by its own motives, all resulting in one of the year’s most memorable and satisfying horror climaxes.

The Feast moves slowly at times; it is almost languid in how it allows the family to indulge, wallow even, in their grotesquery which, to their own eyes at least, they feel presents to the public success (regardless of how far from the truth, with the two sons especially, that may be). Glenda in many ways is the vilest of all, as her connection to both land, place and community are what have brought her family to this emphatically opulent but thoroughly soulless home in the first place – while the rest of her family are just awful, Glenda’s history with the land upon which the story takes place in many ways make her the least forgivable of all the family’s ghastly members. Econo-ghoul Euros is perfectly disgusting in a performance brought to repulsive life by Rhodri Meilir, and it is only Lisa Palfrey’s Mair who gives us a glimpse at the wholesome status quote otherwise typical to this region that this family seek to so unthinkingly destroy.

And then, thrown into all, is ticking time bomb Cadi herself, who – played in an exceptionally restrained and subtle performance by Annes Elwy – remains perhaps even more enigmatic at the film’s conclusion than she does when it begins. The Feast is unrelentingly focused on a strong ideological message that explodes with an admirable visceral intensity in the film’s climax, but it is what leads to that – with the mysterious, undecipherable Cadi herself as our tour guide – that builds the suspense to make the payoff so worthwhile. The Feast is unrelenting, captivating and unforgiving, and Jones is a visionary; between this and Prano Bailey-Bond’s exceptional Censor, it’s a genuine mystery why anyone but the Welsh are even bothering to make horror films right now.