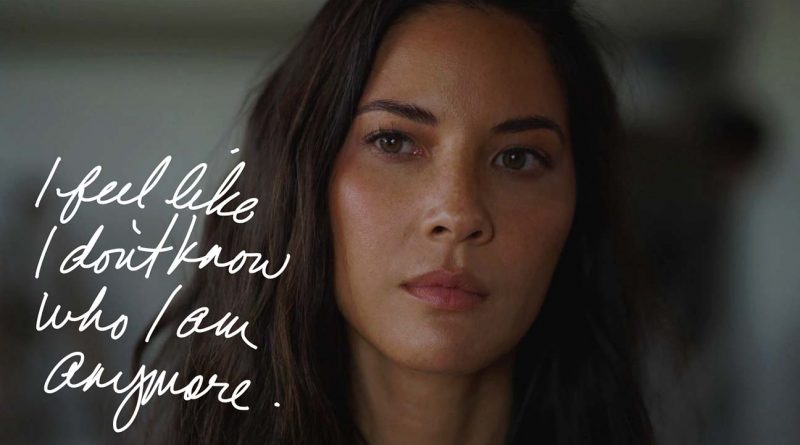 We’ve seen before how people who seem to have charmed lives can have a whole different view of themselves, but the drama Violet portrays this struggle for confidence in an experimental yet engrossing and sympathetic way.

Violet Calder (Olivia Munn, The Rook) looks like a high-functioning film exec, working at a production company, visiting sets, and hobnobbing with directors and power players who gush over her. Yet in her head, a whole other movie plays: a loop of fearful images such as decaying animals and rioters with sledgehammers, with a narrator who carps about how worthless, foolish, and stupid she is.

Making her feature writing and directing debut, producer and actress Justine Bateman (Family Ties, Desperate Housewives) crowds the screen at times to mimic how crowded Violet’s head is. Whatever Violet would like to say to this voice – or at least believe – appears onscreen in white handwriting, filling the negative space around Violet when she’s in the office, in the car, or at home. Sometimes the inner turbulence reaches such a pitch that the screen turns red before fading to black.

This is a bit disorienting at first, in part because Violet’s inner voice is that of a judgmental man (Justin Theroux, The Mosquito Coast). He spouts the type of criticisms, we learn, that her mother once did, and the writing that wonders, “Why can’t I just be happy?” at times feels repetitive.

Yet Munn’s relatable and subtle performance gives Violet an anchor that overrides this busyness, allowing us to become absorbed in Violet’s cautious but fulfilling transformation. Notice how her wide smile doesn’t reach her eyes in meetings when the voice tells her, “Don’t make a scene” or “Don’t be a bitch.” She weeps when it tells her, “You’re a baby. You’re so selfish. You’re a loser.”

When Violet finally begins ignoring the voice, acting on what’s scared her, she looks blissful, radiant, and whole.

Violet works for Tom Gaines (Dennis Boutsikaris, Better Call Saul), a producer with whom she had a fling earlier in her career. The voice encourages her to date executives, like Roger (Peter Jacobson, NCIS: Los Angeles), the bigwig who keeps sending her flowers, instead of Red (Luke Bracey, Little Fires Everywhere), a screenwriter and longtime friend.

Although Violet is intelligent and savvy, she doesn’t trust that directors want to work with her or care about her passion project, an arty drama. Tom feels flattered but also threatened by her, calling her earnestness and enthusiasm “frothy” and making other sexual innuendos.

Meanwhile, her brother (Todd Stashwick, 12 Monkeys) and aunt (Bonnie Bedelia, Panic) back in the Midwest call her a “big deal in the movie business” in that biting way that’s anything but proud. Their brief scenes show how anything Violet says fulfills their image of her as a conceited brat.

Violet, fortunately, has the perceptive Red to notice her sadness and anxiety. Their tender friendship that teases of deeper feelings is genuine and heartwarming. She also has Lila (Erica Ash, Legacies), another pal who likens Violet’s inner voice to being cast in a part she doesn’t want to play. While these characters and a kind ex (Simon Quarterman, Westworld) kickstart Violet’s growth in a way that some viewers might find convenient, hers is still a worthwhile journey.

Bateman has said she drew from her own experience of being her worst critic to write Violet, and the film demonstrates a way to follow in Violet’s footsteps. Turning down the voice’s volume isn’t easy, but once Violet recognizes its chatter as lies, she figures out how to break free.