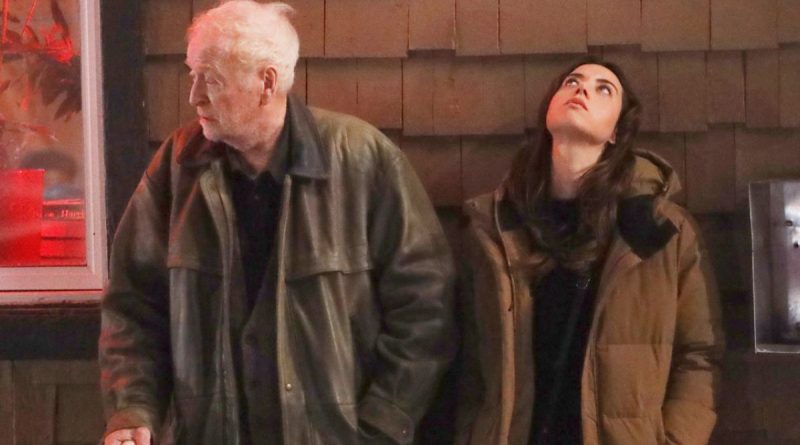 Octogenarian actor Michael Caine is an absolute hoot as an outspoken, cantankerous author whose favorite expression is “Bullshite!”

The comedic story ostensibly revolves around Lucy Stanbridge (Aubrey Plaza), a young editor who pins her only hope of saving her father’s boutique publishing company from bankruptcy on an elderly, alcoholic writer named Harris Shaw.

While Shaw’s legendary last book Atomic Autumn was written nearly a half-century ago, an examination of his contract reveals that he actually owes her company a follow-up book. So Lucy, accompanied by her assistant Rachel (Ellen Wong), decides to pay him a visit, spotting a foreclosure notice on his disheveled home.

Although reclusive Shaw pulls a shotgun on them, Lucy talks her way into him allowing her to publish a manuscript – “The Future Is X-Rated” – that he’s squirreled away for decades. Although the contract also states she can edit it, he adamantly refuses to allow her to touch a word: “I’ll be damned if I let the incompetent hand of nepotism molest my words, Silver Spoon!”

So off they go on a Book Tour, a whiskey-fueled road trip during which Shaw pulls various offensive stunts, including urinating on his own words, assaulting a smirking New York Times literary critic (Cary Elwes), gruffly baiting millennials and repeatedly uttering “Bullshite!” – a self-styled catchphrase which quickly becomes an Internet meme.

Granted, Anthony Grieco’s flimsy script is contrived, yet Lina Roessler’s canny direction allows Caine and Plaza to play off one another, gently satirizing the clash between art, commerce and celebrity.

FYI: A widower. Shaw keeps a photo by his bedside; it’s of Caine and his wife Shakira Baksh.

When questioned about whether he’s still open to offers, Michael Caine told Variety: “I have a spine problem so I can’t walk very well. But regarding retirement, I’ve spent over 50 years getting up at 6 a.m. to make movies, and I’m not getting rid of my alarm clock.”

On the Granger Gauge of 1 to 10, Best Sellers is a poignant, cross-generational 6, available on DVD and streaming platforms.