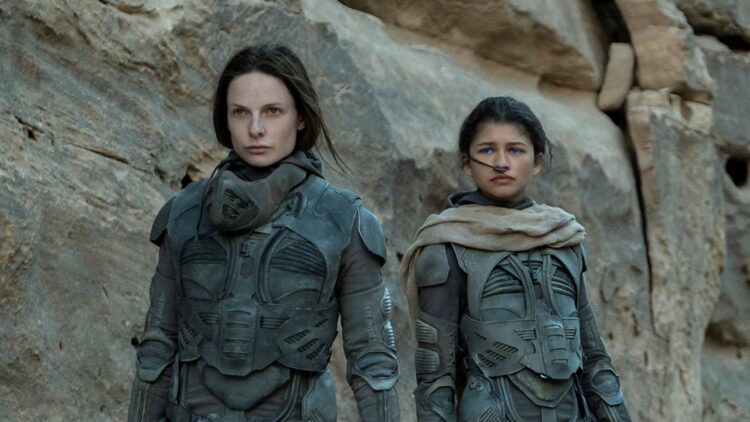 Since its publication in 1965, Frank Herbert’s epic tale has become one of the most popular sci-fi novels of all time. No wonder that filmmakers have grappled with interpreting its vast, complex story.

Arrakis’ shimmery, sparkling Spice, called Melange, is the most valuable element in the galaxy, essential to interstellar travel; a natural resource, it’s propelled by hot desert winds, leading to blistering sandstorms, and guarded by colossal, writhing sandworms, capable of sensing vibrations from far away.

The noble House Atreides has just been place in command under Duke Leto (Oscar Isaac), who arrives on Arrakis from his oceanic home on Caladan with his clairvoyant concubine Lady Jessica (Rebecca Ferguson) and their teenage son Paul (Timothee Chalamet).

Priestess Jessica was taught by the matriarchal Bene Gesserit sisterhood, whose members have supernatural powers, yet she has defied the all-female tradition by indoctrinating vulnerable Paul with psychic mysticism, secretly training him in mind control by activating ‘the Voice,’ manipulating how words are spoken.

Meanwhile, Paul has been having prophetic visions of Chani (Zendaya), a Fremen warrior who – finally – near the film’s conclusion – proclaims: “This is only the beginning.”

Could Paul be the genetically superior ‘Kwisatz Haderach,’ fabled Fremen messiah? Is that his destiny?

As of now, Warner Bros. has not announced a date for “Part 2,” which seems inevitable.

Running 2 hours, 35 minutes – on the Granger Gauge of 1 to 10, Dune is a sumptuous, spectacular 7, available in theaters and streaming on HBO Max through Nov. 21.