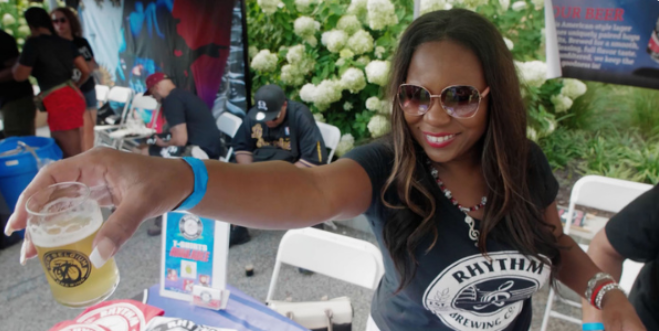 When breaking down long-laid racial and cultural barriers, what do you do with these mofos laying the bricks?

You have a beer with them.

Documentary One Pint at a Time, a nominee for the Gordon Parks Black Excellence in Filmmaking Award at the 2021 Tallgrass Film Festival, chronicles the history of brewing and institutional practices of constriction as they visit emerging brewers around the nation cold smashin’ their dreams in a delicious demonstration of craftspersonship.

Directed by Emmy-winner Aaron Hosé, One Pint travels out from the spark of vision into ancient Afrika and back to post-pandemic modernity. All the while, knowledgeable and passionate brewers make the case for an expanded landscape in an industry that has, with the rest of the world, been narrow for far too long.

The beginning introduces a bland, faded history full of statistics and facts but then bursts into color. Against the scenic backdrops of packed beer fests from Florida to Connecticut to Louisiana the hustle of bringing a dream to fruition is beautified and revitalized.

This shade of craving is evident in the explosive and expressive graphics in brands like Cajun Fire. It’s the kind of wanting born of purpose, the place where no notion is foreign. Even Black folks brew beer.

Where New England is known world-wide for its IPA, it takes a brewing wizardress mixed with Salsa, mama’s Sunday dinners, salesmanship and watch-me-do-thisness to pour Rhythm, Connecticut’s premier lager.