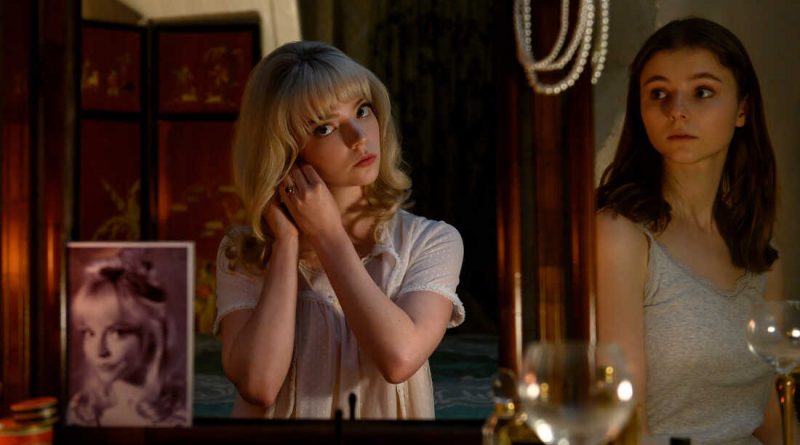 Joyously dancing around her Cornwall home to Peter and Gordon’s 1964 chart-topper, A World Without Love, clad in a dress fashioned out of newspapers, Eloise (Thomasin McKenzie) is the picture of a happy, effervescent teenager. And this opening scene in Edgar Wright’s Last Night in Soho suggests a lively coming-of-age story is about to unfold. That Edgar, such a tease! No happy-go-lucky tale this as what gradually unfolds, instead, evolves into a chilling, time-traveling blend of Repulsion, The Shining, and Blow-Up.

Eloise’s ambitions take her far from the rural home she shares with her grandmother Peggy (Rita Tushingham, an icon of the 1960s era Wright seeks to replicate, thanks to her roles in such films as The Knack… And How to Get It and Smashing Time) to London to study fashion design. Eager to experience life in the big city, Eloise is, nevertheless, a fish out of water, a country mouse among city rats – particularly in student housing. So, she rents a top-floor bed-sit from the imperious Mrs. Collins (Diana Rigg in her final role) and in her new environment, begins to dream of the Swinging 60s that have long enamored her and a singer, Sandie (Anya-Taylor Joy), who longs to be a pop star like Petula Clark or Cilla Black. But when her dreams take a turn, so does Eloise’s grip on reality.

A jaunty soundtrack and growing horror are in lockstep. It’s an impressive set of tunes, Dusty Springfield’s Wishin’ and Hopin’, The Kinks’ Waterloo Sunset (Terence Stamp, long thought to be the “Terry” referenced in the song, also has a small but pivotal role in Last Night in Soho), and Sandie Shaw’s Always Something There to Remind Me, among them. Those songs as much as Marcus Rowland’s impeccable production design sell the 1960s world that is Sandie’s. But while the music promises the Carnaby Street/King’s Road London Eloise has long imagined, the city Rowland builds is a far more dismal place.

As a horror thriller, Last Night in Soho is effective. We feel Eloise’s growing terror and feel for her. At the same time, one can’t come away but feel, really? This is what you decided to do with 1960s London, Edgar Wright? Because what starts out as a valentine to an era ends up as anything but. And for poor Eloise – This is a girl who loves her music and how is she ever going to experience it with that same pure joy again? After what she’s been through? It is a development that seems cruel.

Still, it is hard to fault Wright when he gave such a gift to Diana Rigg. The 1960s Emma Peel from The Avengers, feminist icon to any little girl who happened upon that show in the last 56 years, essays her final role in Last Night in Soho. She died a year ago at 82, and Wright dedicates the film to her. In a drama full of vivid performances and a top-notch cast that includes in addition to McKenzie and Anya-Joy, Matt Smith as a sleazy ’60s scenester and Michael Ajao as a classmate of Eloise, Rigg stands out. Mrs. Collins is a supporting role, but it is an important one, and Rigg plays her scenes with vigor. The role is a fabulous swan song – if only the movie was just as fabulous.