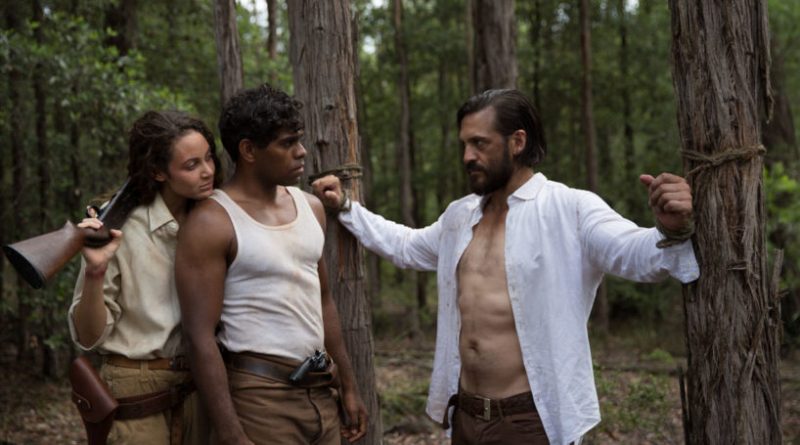 In The Flood, writer-director Victoria Wharfe McIntyre centers a gritty revenge Western around an indigenous Australian family and the atrocities of racism. Yet in spite of some strong performances, the film’s storytelling choices at times make it difficult to connect emotionally with the material.

Set shortly after World War II, when the government offered to treat First Nations People as equals should they fight for Australia, The Flood certainly mines a rich and painful history. But from the opening moments, it doesn’t seem to trust the audience to follow the various developments. Several title cards introduce us to Jarah (Alexis Lane, Cleverman), who lost her parents in a flood but later married her sweetheart, Waru (Shaka Cook, Operation Buffalo).

The couple and their daughter, Binda (Simone Landers, Cargo), are a happy family until Waru enlists in the military. Although we briefly see him in battle, more title cards inform us that the government lied in its promise to treat the veterans equally upon their return. Meanwhile, authorities such as Gerald McKay (Peter McAllum, Heidi) decide to reclaim the mission lands where Jarah, Binda, and other indigenous families live, separating the mothers from their children and sending them to work as slaves.

Frontloaded with this information – including a McKay family tree to help identify his various sons – The Flood nevertheless becomes confusing once Waru returns home. Jarah is unable to locate Binda. Yet Waru inexplicably finds their daughter with little problem, slaying several people at McKay’s ranch and going on the run.

Thinking Jarah knows where her husband and daughter are, McKay has her arrested. The local lawman is glad to indulge anyone who wants to rape her, a trauma to which the film sadly returns often, including in Jarah’s memories.

Eventually, Jarah and her family reunite, but a turn of events triggers her to seek vengeance against the McKays and their supporters while friends such as Maggie (Dalara Williams, Top End Wedding) suggest forgiveness.

McIntyre shot The Flood in her hometown of Kangaroo Valley, and her affection for the area’s bushland and subtropical rainforests is clear in the framing of dreamy visuals of Jarah in a white dress or the family surviving on the lam. Respectful of indigenous viewers, the film also includes a warning for them that it may contain images and voices of deceased persons.

However, the sprawling cast hampers the story’s focus, and one wishes that the film was more trusting in letting events unfold. A scene where landowners tell Jarah that her daughter is now with a good family who properly cares for her bites with cruelty in a way that the title cards and on-the-nose dialogue of later scenes can’t manage.

Lane and Cook are quite good, especially in heavier moments, with Lane conveying Jarah’s palpable anguish. She’s not a cold avenger; at one point after killing several men, she crumples in agony, prepared to shoot herself until Waru draws her into his arms.

The Flood has a lot of story it wants to tell, with flashbacks to Jarah’s childhood, along with that of other characters. Unfortunately, it feels rushed in places, offering little room to connect with these characters so that their actions have space to breathe.