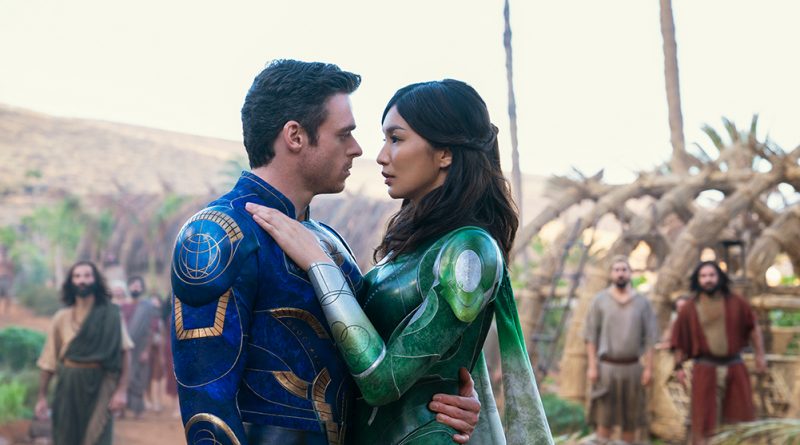 Myth, legend, and theology come together like they never have before in Marvel’s newest entry, Eternals. Academy Award-winning director Chloé Zhao brings her intimate, personal style of storytelling to cinema’s most sprawling universe, introducing new characters and new ideas to the familiar franchise.

The Eternals are a race of immortal beings from Olympia who were sent to Earth some 7000 years ago to protect humans from a rival race of mutants known as Deviants — strange, sinewy creatures that look like both something from very far in the past and very far in the future. Over the centuries and millennia, the Eternals have fulfilled their mission to protect the world from Deviants while witnessing mankind descend into war and famine, chaos and pain of their own making. But the Eternals have loved them anyway, walking among them, inspiring myths and legends as they wait for the call that their work is done and it is time to return home.

Zhao, whose films tend toward quietly introspective portraits from middle America, was an unlikely choice to helm a big, green-screened, action/fantasy franchise movie. And while the hallmarks of her usual work are absent (for instance, her cast is full of Hollywood stars rather than non-professional actors), we still glimpse some of the elements that make Zhao’s films feel so definably hers. As the centuries unfold, the team of Eternals goes on to live their own mostly separate lives, scattered to the winds, some clinging to the memories of what used to be when they were all together. Their love for humanity only grows with the rise and fall of each civilization and they keep themselves somewhat tethered between what once was and what is to come.

Where the script is overburdened with exposition and a sometimes sluggish pace, the cast is beautifully assembled and watching these ten new heroes work together and apart and back together again is a delightful odyssey. There is plenty to be said about the two biggest stars, Salma Hayak’s Ajak, the Prime Eternal who leads them, and Angelina Jolie who plays Thena, who is suffering from “Mahd Wy’ry” (pronounced “mad weary”), a debilitating and dangerous condition caused by too many memories. But the beating heart of this ensemble is Gemma Chan, whose Sersi loves deeper and more fully than any of the others could. As Sersi begins to grow and change, so too do we see an evolution in Chan who moves from supporting player to a leading lady in her own right.

There are two men vying for Sersi’s heart. Her former flame and fellow Eternal Ikaris (Richard Madden), and her current beau Dane Whitman (Kit Harington), a mortal Londoner who works at the Natural Museum of History. Ikaris is her past and in many ways present. Dane is a symbol of the life she could have if only she can let go. Dane fades into the background as the Eternals face a new threat, but even when he’s gone from the screen, he always feels like a lingering presence, a whispering to Sersi that she needs to make some decisions.

Some of the cast of this big ensemble may stand out a bit more than others, but no one is fighting over the spotlight. Brian Tyree Henry delights every time he is back onscreen, his Phastos always wanting to give human technological evolution a little nudge. He now lives the quiet, suburban life with his husband (Haaz Sleiman) and their inquisitive son (Esai Daniel Cross) and he doesn’t want anything — especially not his old friends — disrupting that. Lauren Ridloff’s Makkari, blessed with superspeed, is charming and funny, and also the MCU’s first deaf character. Kumail Nanjiani plays Kingo, a wisecracking Bollywood star who would give Deadpool a run for his money if the two ever got together. Lia McHugh is Sprite, Don Lee is Gilgamesh and Barry Keoghan is Druig, all three with different goals and dreams, but all three are much more compassionate and caring than they might seem.

Despite the action and the visual effects, there’s little to remind us that this is a Marvel movie. Apart from a passing mention of Dr. Strange and the leaderless Avengers, and a bit of exposition involving Thanos’ genocide (mercifully not called “The Blip” here), not only do the Eternals keep themselves out of the general affairs of humankind, but the film also keeps itself at a distance from the 25 that came before it. For this reason, some diehard fans may feel it’s not a “real” Marvel movie or that it doesn’t fit. But in setting itself apart from the others, it serves as a curious addition to the collection and an exciting peek into the future of the franchise. It is a future more reflective of the world we live in, with grander ideas and new types of storytelling. In that way, Eternals is an exciting next step in a franchise that may just go on forever.