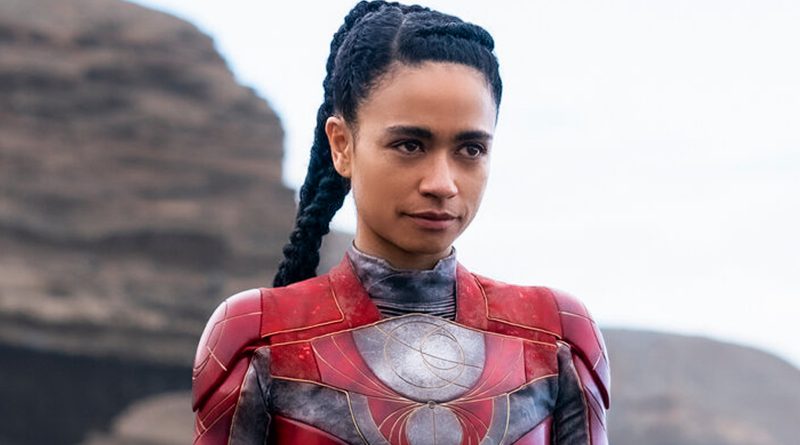 As the Marvel Cinematic Universe (MCU) expands to include some 26 interconnected movies, more and more superheroes emerge. And this latest entry is directed by Oscar-winner Chloe Zhao (Nomadland) with an emphasis on eclectic diversity and familial inclusion.

In an exposition-filled introduction, the 10 cosmic Eternals emerge from an intergalactic slab in the sky. Created by the Celestial god Arishem, their purpose is to save humanity from predatory Deviants.

Emerging in Mesopotamia in 5000 B.C., they’ve since been embedded among humans for centuries – under the spiritual leadership of Ajak (Salma Hayek), a matriarchal healer.

Much of the backstory revolves around high-flying Ikaris (Richard Madden) and his romantic relationship with matter-manipulating Sersi (Gemma Chan), who is also wooed by a London-based historian Dane Whitman (Kit Harington), who has a “complicated” family history. (In Marvel lore, Dane is the Black Knight, possessor of the Ebony Blade.)

Loosely based on Jack Kirby’s 1976 When Gods Walk the Earth, the dense, non-linear script, filled with too many subplots, is cobbled together by Patrick Burleigh, Ryan & Kaz Firpo and director Chloe Zhao, who collaborates with cinematographer Ben Davis to create a dazzling, if utterly confusing concept which includes Greek mythology and bizarre allusions to J.M. Barrie’s Peter Pan, Wendy and Tinkerbell.

Above all, it’s visually gorgeous, combining the sweeping splendor of exotic locations around the globe with predictable CGI action clashes – kudos to production designers, art directors and set decorators.

FYI: For purists, in the comics Ajak, Makkari and Sprite are males; here, they’re females.

On the Granger Gauge of 1 to 10, Eternals is an exciting, yet exhausting 6 – only in theaters.