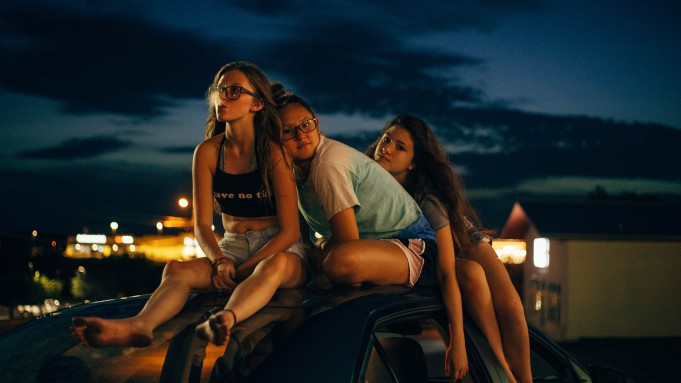 Teenage girlhood has never been easy. The documentary Cusp captures that tricky twilight between childhood and adulthood for a clutch of rural Texas teens through a meandering summer of parties, bedroom hangouts, and unflinching intimacy. One moment they’re whimsical enough to blow away dandelion seeds; the next, they’re sharing matter-of-fact observations about boys, sexual assault, and sexual abuse.

“There is no normal in teenage years,” one girl notes. “We’re all confused.”

First-time directors Parker Hill and Isabel Bethencourt, who won a Special Jury Award at the Sundance Film Festival, first met Brittney, Autumn, and Aaloni at a Texas gas station while traveling. Struck by the girls’ openness and carefree attitudes, the women asked to tag along with them throughout the summer to make Cusp, airing this month on Showtime.

The result is a sympathetic vignette about navigating that window where you’re more grown-up than you’re quite ready to be. “I feel like what most teenage girls suffer from is, we’re not seen,” one says.

About 15 or 16 years old, the girls have sometimes fraught family lives and relationships but an easy camaraderie with each other. One plucks another’s eyebrows or brushes knots out of another’s hair.

They cuss, smoke, get high, and drink between sharing French fries, ice cream, and advice, especially about sex and agency.

Brittany hangs around with older teens and dates one of them. She talks about moving in with him even as she frets whether to text him when she’s out late with Autumn. He’ll say, “Do what you want,” she says, which means he doesn’t like it.

Autumn says how her mom would beat her for crying because “crying is weak.” She lives with her father because a friend of her mother’s molested her. Her boyfriend calls her a “Tinkerbell,” saying she always wants attention.

Aaloni considers her mom her best friend and loses patience with her father, a military veteran who has his own issues. Her mom asks whether she should get Aaloni birth control, then scolds her for losing her virginity in a car. Autumn says she’d get hers back if she could.

So would Brittany. “I just was so scared to say no,” Brittany says.

“Girls don’t know how to say no,” Autumn adds later. “Guys are powerful.”

You can always say no, Aaloni says. “They’re gonna do it anyway.”

Cusp’s verité style proves engaging, even if the film overall lacks a cohesive narrative. It hints that being a teenage boy isn’t easy, either, with scenes of men yelling at each other at a soccer match and youths shooting firearms while the girls take selfies in a swing.

The ending, with the start of the school year, arrives just as one might wonder where the girls go from here. They’re raised to be strong, one muses, but experiencing everything she feels doesn’t make her weak.

Hill and Bethencourt might have lucked into finding some friends who feel comfortable on camera, but the girls’ tender frankness shows that what they have to say is definitely worth hearing.