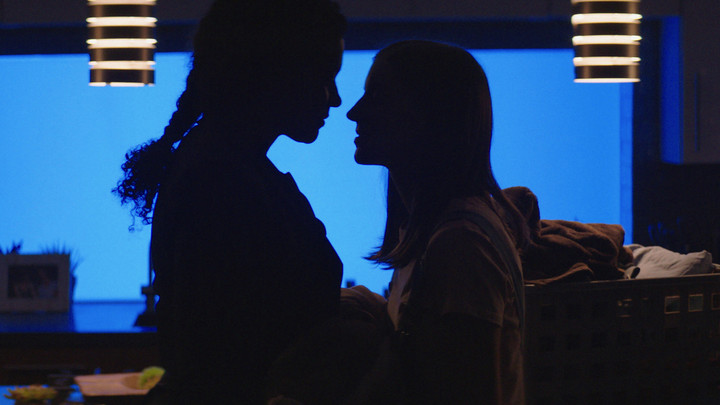 My Fiona is a compassionate character-driven revelation of how a woman’s suicide affects those she leaves behind.

At least that’s how it starts out. But writer-director Kelly Walker seems to second-guess herself, not trusting that her promising premise of the many ways we handle grief is enough to sustain audience interest.

So she starts tossing in all sorts of diversions, including attitudes toward lesbianism and Black women, parent-teacher disputes, children’s behavioral issues, side effects of antidepressants, the effectiveness of psychiatric therapy, use of artificial insemination, Jewish burial traditions, and the redemptive quality of adding a dog to a household.

The result is a mottled array of plot twists that add little to the original idea which works so well: investigating how the bereaved seek consolation from each other.

The cause of all this distress is Fiona (Sara Amini), a lively, charming entrepreneur who, along with her lifelong best friend Jane (Jeanette Maus) takes the plunge into developing Fiona’s dream of starting her own business into reality.

It’s hardly giving anything away to reveal that one day while working in their shared office space, Fiona glances at her phone and, with a subtle change of expression, wraps herself in a coat and tells Jane she’ll be right back. She then leaps to her death several floors below. (What was so upsetting about that phone call? We never know. It’s a red herring; maybe the filmmaker’s point is that it doesn’t matter.)

Fiona’s loss means Jane’s life pretty much falls apart, but not so that of Jemma (Corbin Reid), Fiona’s wife, a successful corporate lawyer who is now the sole parent of 7-year-old Bailey (Elohim Nycalove), birthed by Fiona. Jemma seems relatively unfazed by her loss; her main concern is doing right by Bailey, a concern shared by Jane.

The entanglements that revolve around the child lead to the wayward tendrils flowing away from the characters and into scenes where the actors are required to deliver sometimes awkward expository speeches explaining each situation’s relevance.

It would have been so much more effective if the film retained its taut focus on how these characters, while competing to display their importance in Fiona’s life, attempt to seek consolation from each other.

Karen Martin has an extensive background in reviewing, editing, and reporting on film, theater and other arts events for newspapers, magazines and websites. After a lengthy stint as MovieStyle editor at the Arkansas Democrat-Gazette, she's now the editor and main writer for InArkansas.com (part of the Arkansas Business Publishing Group), covering movies and entertainment, among other lifestyle beats.