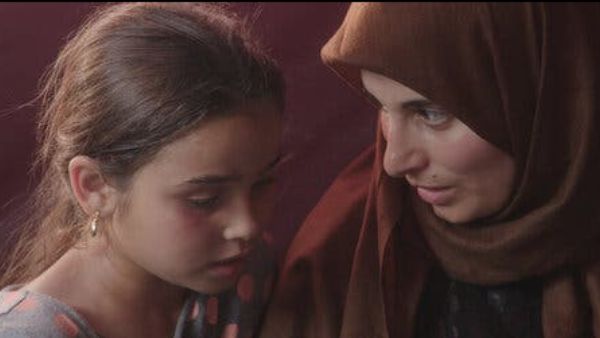 Syria’s civil war has raged for a decade.

It may have faded from current headlines. But, in the words of United Nations Secretary General Antonio Guterres, it remains “a living nightmare.”

How could it not, with more than 5 million refugees displaced from their homes — and hundreds of thousands of them scattered across more than a hundred other countries?

Such overwhelming numbers suggest the scope of the situation, but not the true human cost.
For that, we need documentaries like Simple as Water.

The latest from Oscar-winner Megan Mylan (Lost Boys of Sudan), the haunting — and achingly human — Simple as Water focuses on four different Syrian families struggling to move on with their lives.

We begin with Yasmin in Greece, living in a waterfront tent with her four children. Her husband Safwan is in Germany, trying to qualify for asylum — and the right to reunite the family there.

For now, Yasmin endures rounds of red tape applying for asylum in Greece while assuring the kids — ages 9, 7, 6 and 5 — that there’s a future for them because “there’s no war there and no air strikes” in Germany. Assuming they can get there.

In Turkey, we meet Samra, a sad-eyed mother of five whose shopkeeper husband disappeared in Syria after doing business with the Assad regime.

Before the war, “we had a happy life,” Samra recalls. “Every time I look at my kids, I remember the good life they had. I’m afraid for them.”

So afraid that she’s decided to place her children in a local orphanage — against the wishes of her oldest son, 12-year-old Fayez, who takes care of his younger siblings while his mother’s working in the fields.

“Home is better for my soul,” Fayez forthrightly tells an orphanage official. “I lost my father. I don’t want to lose my mother too.”

Omar and his teenage brother Abdullahman, meanwhile, have found peace — of a sort — in Pennsylvania, with Omar driving a delivery truck while Abdullahman adjusts to high school.

Abdullahman has long since adjusted to to life without the leg that was blown off by a rocket strike when he was a little boy. So adjusted that he’s comfortable playing military-themed video games exploding with guns, bombs, blood and death.

As for blood and death, they’re still inescapable in Syria, as Diaa knows all too well.

The last time Diaa saw her son Mohammed, he came home from exile in Egypt, covered with burn marks. (“ ‘I was lucky, Mom,’ “ he told her. “ ‘ You should see what happened to the other people.’ “) Now he’s disappeared — maybe a prisoner, maybe worse.

But the documentary balances those scenes of quiet anguish with heart-warming moments too, especially the ones depicting kids being their irrepressibly inexhaustible selves.

As the youngsters play, their weary, wary guardians valiantly try to solve the daunting challenge of maintaining their humanity amid such inhumane circumstances.