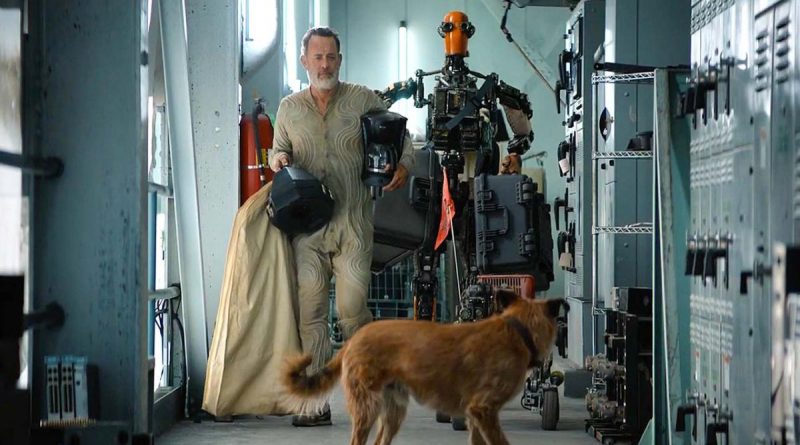 Family comes in many forms. In this dystopian world, it’s a man, his beloved dog and the robot he builds to care for his dog after he dies.

Afflicted with radiation poisoning, robotics engineer Finch Weinberg (Tom Hanks) is one of the few survivors of a cataclysmic solar flare that destroyed the ozone layer, creating a toxic wasteland where the Earth’s temperature hovers around 150 degrees.

Wearing a high-tech hazmat suit that monitors exterior conditions, Finch periodically leaves the subterranean laboratory of the company in St. Louis where he once worked. Accompanied by a modified lunar rover named Dewey, he forages for food for himself and his Irish terrier named Goodyear.

During the past decade, Finch has created a robot, specifically designed to watch over Goodyear when he’s gone. Programmed with encyclopedic knowledge that includes a manual for the care and training of canines, the android’s midsection is even embedded with an opener for canned dog food.

When a deadly 40-day superstorm is forecast, Finch loads Goodyear, Dewey and the robot into a solar-powered 1984 Fleetwood RV and heads west – toward San Francisco and the Golden Gate Bridge. That’s when the plot becomes a perilous ‘road trip,’ as they encounter various, sometimes harrowing trials and tribulations along the way.

A unique Everyman, Tom Hanks spent Cast Away (2000) talking to a volleyball named Wilson. Here, when not singing American Pie to himself, he teaches the constantly curious robot who names himself Jeff (Caleb Landry Jones) as much as he can about responsibility, love, friendship and being human.

FYI: Originally, Jeff was supposed to come into contact with humans who were not what his creator, Finch, had predicted. Problem was: the film rang too long. So those sequences were left on the cutting-room floor.

On the Granger Gauge of 1 to 10, Finch is a sweetly sentimental 7, streaming on Apple TV+.