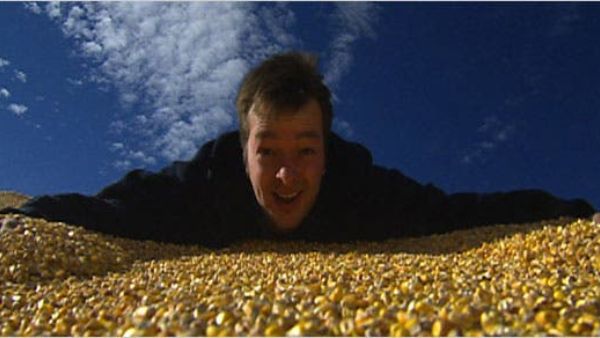 If you believe you are what you eat, you’ll no doubt be shocked to learn that you’re mostly corn. Aaron Woolf’s documentary reveals that the majority of Americans eat mostly corn–or, to be more specific, food products derived from or containing corn. In King Corn, Woolf follows young eco-activists Ian Cheney and Curt Ellis–who met and became investigative cohorts while undergrads at Yale–as they return to the scene of their coincidentally similar family roots in rural Greene, Iowa, to plant and harvest an acre’s worth of corn, and then to trace their crop as it is processed into the food products that nurture the increasingly obese and unhealthy–and always hungry–American population.

Without much difficulty or drama, Cheney and Ellis convince a local farmer–who actually sells his family farm during the course of the filming–to let them use an acre of his land to plant their crop.

Acting as our eyes and ears about current corn conditions and concerns–government subsidies, fertilizer, pesticides, soil type and the like–the eco-duo call on local experts to advise them about the best corn to plant, best way to plant it and, indeed, to do some crop maintenance for them. Continue readIng on CINEMA CITIZEN