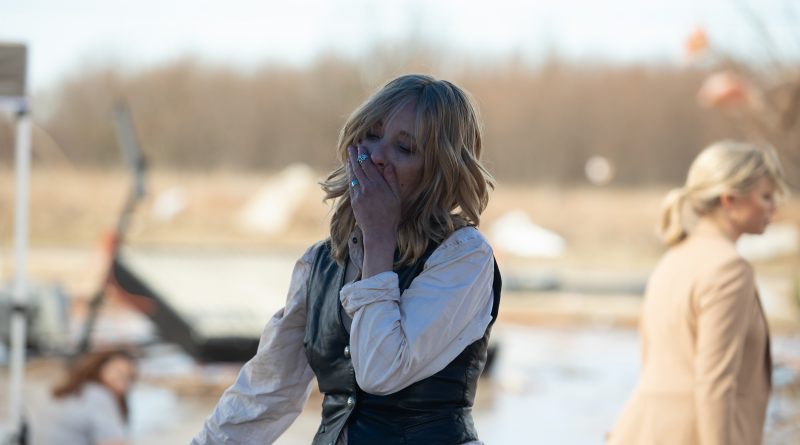 It’s hard to imagine a more ideal spot to make a tornado movie than central Oklahoma.

But the independent film “13 Minutes”  wants to talk about more than just the weather. Written, directed and produced by Lindsay Gossling (“Un Traductor”), the twister drama spins through a veritable tsunami of hot-button social issues in the build-up to the rampaging storm.

Filmed in November and December 2019 with Oklahoma City and the surrounding areas as the primary location, “13 Minutes” opened Oct. 29 in theaters and is due out on-demand and on digital Nov. 19.

“13 Minutes” follows the diverse denizens of the fictional Oklahoma town of Minninnewah, who are going about their interconnected lives in the hours before a severe spring storm sweeps down the plains.

Farmers Rick (Trace Adkins, “I Can Only Imagine”) and (Anne Heche, “Six Days Seven Nights”) are struggling to make ends meet, even with her side gig as an ultrasound technician. The couple are conservative Christians who don’t yet realize that their only son, Luke (Will Peltz, “Unfriended”), is gay and having an affair with Daniel (Davi Santos, NBC’s “Law & Order True Crime”), one of their Hispanic hired hands.

Newly employed on Rick and Tammy’s farm is Carlos (Yancey Arias, Amazon Studios’ series “Bosch”), an undocumented immigrant who is a skilled mechanic but speaks little English. His fiancee Ana (Paz Vega, “Spanglish”), a Mexican maid at the local motel, is getting ready to buy them a house and is thrilled at the possibility of achieving the American dream.

Even as storms start roiling around state – with the weather services warning of ingredients coming together for possibly devastating tornadoes – the residents of the Heartland hamlet go about their lives. Gossling mixes in issues like racism, abortion, homophobia, immigration and more — along with obliquely referencing climate change — but they don’t seem to flow naturally into the storytelling and slow the pacing of the film.

The experience cast supplies mostly solid performances, but the actors are hindered by the shaky narrative, which swirls with implausible plot twists and out-of-character choices.

Although the special effects are obviously lower budget than previous stormy films like “Twister,” the cinematic tornadoes of “13 Minutes” are passably intimidating. Gossling’s crew — consisting of about 75% Oklahomans — does stellar work recreating the aftermath of a destructive twister, complete with delicate objects like vases and picture frames left unscathed amid the sprawling wreckage.

To its credit, the movie — named for the short time frame residents have to seek shelter before the massive tornado touches down — is willing to delve into the lives and issues of small-town residents of the often-ignored “flyover states” without too much judgment.

It offers a close-up look at the twisters that plague Tornado Alley without overly sensationalizing them, with effective reminders that for folks who don’t speak English or have disabilities, weathering these storms can be particularly difficult.

But “13 Minutes” doesn’t offer many interesting insights or much compelling storytelling.